Godspeed To You, Barack Obama 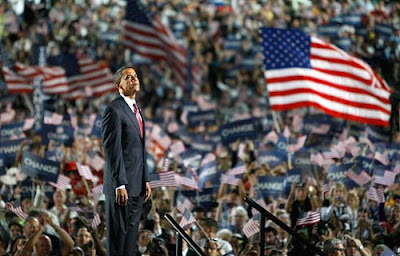 Given the historic vitriol of this presidential campaign, it has been pretty easy to overlook something else historic that makes my heart nearly burst with pride:

It was 53 years ago, six years before Barack Obama was born, that Rosa Parks was ordered to get out of her seat on a bus in Montgomery, Alabama, because of the color of her skin, and today a man of color -- the embodiment of Martin Luther King's dream -- stands on the threshold of the presidency.

This could have not happened in the so-called Party of Lincoln, which has become a lily-white canker on the body politic, but it could happen in America.

Godspeed to you, Mr. Obama.

Rosa Parks ... what a courageous soul she was. "ENOUGH!" she said, as she transformed an ordinary action -- taking a seat on a city bus -- into an iconic moment.

I'm a Canadian citizen, and I'd give anything to be able to vote in the US election. The rest of the world is holding its collective breath as we await the outcome...

I'm no Republican, but ... do the names Colin Powell, Condoleeza Rice, Alan Keyes and Clarence Thomas ring a bell? You may not like those particular personnel choices, but it's fair to say that the GOP is certainly capable of supporting an African American for high office. People care more about ideology than race these days. If Mitt Romney were black instead of Mormon, I believe he would have won the nomination easily.