Hillary To PUMAs: Get Off Your Asses 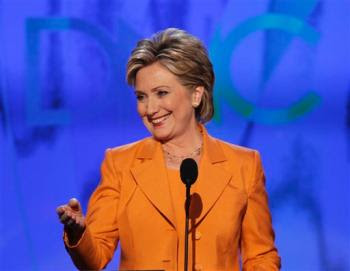 Hillary Clinton hit the ball out of the park last night in the most anticipated political speech in forever. I'll leave the deep analysis to others, but if you want to skip that, here's it in a bit, as the Aussies like to say:

"And whether you voted for me, or voted for Barack, the time is now to unite as a single party with a single purpose. We are on the same team, and none of us can afford to sit on the sidelines.

While there will be some pre-menopausal PUMAs who would rather have four more years of Bush than vote for Barack Obama, their numbers are going to be miniscule. And they deserve each other.

Photograph by Ron Edmonds/The Associated Press
Posted by Shaun Mullen at 7:08 AM
Email ThisBlogThis!Share to TwitterShare to FacebookShare to Pinterest