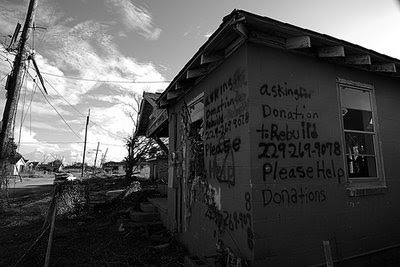 That's the phrase that will be repeated seven times during the speech [George Bush] is going to make. Three years? "Hopeful signs of progress" after three years?

Here's what I know. A city I used to adore, hell, I loved New Orleans sober. There were a lot of towns that once I quit drinking lost all their appeal and charm. Not New Orleans.

Now, it's gone. Dead. Gone. The mold that grew in the Lower Ninth, the noxious stuff that blossomed out of the combination of petrochemicals, human waste, rotting bodies, rotting food, decaying houses and such is toxic to a level where a wonderful singer and a good friend who used to live there is unable to even go near the place he grew up, he has asthma and a breath of home might kill him.

. . . Until my friend, his family and I can strut down the streets on Fat Tuesday with The Wild Tchapatulas, fuck it. I ain't going. To see what they've done would only break my heart.

That George W. Bush has the fucking gall, the bloody goddammed cheek to visit the scene of his worst domestic crime appalls me.

Nothing at all, neglect would have been better than the crap they've delivered and called help.

After years of budget deficits driven by poor economic choices and failed security policies in the Middle East, the presidential candidates must address seriously how they intend to deal with America’s growing budget deficits. McCain’s proposal barely scratches the surface.

The media have been complicit in lapping up the tales of bitter old women. Any story erected around a pre-literary archetype of the destructive power of a woman scorned is destined to be hit candy, whether or not it represents any statistical reality. It's hardly clear that Team Hillary is as vast or as powerful as it claims. Polls suggest there isn't a deep pool of Obama-hating women who could derail his election.

These disgruntled women--whether they plan to vote for John McCain, sit out the election, or simply gobble up airtime--are tacitly working toward electing McCain; a candidate who claimed last week at a presidential forum at Saddleback Church that life begins "at the moment of conception" and who voted against legislation ensuring equal pay for women. These women must be well aware that a vote for McCain is a vote to overturn Roe. I assume they don't care. But my real problem with the Hillary Harridans--and the media's relentless focus on them--is that they give new life to Paleozoic stereotypes about irrationally destructive older women.
-- DAHLIA LITWICK
Just so we are clear: visiting your grandmother while vacationing in Hawaii, the state where you were you were born - elitist.

Meeting the millionaire heiress daughter (who you will soon begin an affair with and divorce your first wife and then go on and buy a ton of houses) in Hawaii and then going on and honeymooning in Hawaii – not elitist.
- JOHN COLE
Given the fact that John McCain has stepped into a steaming pile of manure - by confessing that he is clueless about the extent of his own lavish lifestyle - the only question now is whether the heretofore timid Obama campaign has the requisite moxie to exploit this priceless gift...not just today, but for the next 73 days.

Let's put it this way: If this situation was reversed, if a Democratic candidate had so egregiously whiffed on a question of how many houses he has, the GOP would pound away with repetitive precision until the damning message about the "out-of-touch rich elitist" was emblazoned in every American mind.

The fury of the McCain camp's counterattack yesterday (Obama has a house that a sleazy guy helped him buy! How dare anyone attack a former POW!) was vivid proof that Republicans recognize their dilemma. They may not be able to govern worth a darn, as the last eight years have demonstrated, but they are masters of the visceral campaign message. And they well understand that McCain made the mistake of handing the Democrats a visceral campaign message. It ain't brain surgery:

"McCain doesn't even know how many houses he has."

-- DICK POLMAN
[I]f a reporter asked me how many ties I own, there's no way I could answer. Just like McCain, I'd tell him he has to ask my wife. Likewise if someone wants to know how many Wii games my kids have . . . The truth is that McCain isn't out of touch with "ordinary people" because he's rich, he's out of touch with his own domestic arrangements because he cares little about material things, and for many years has devoted his extraordinary energies not to enjoying his wife's money, but to serving the American people.

Predictably, the McCain campaign went into full hothead mode in response to Obama's attacks, flailing about desperately and bringing up Rezko. A few observations on this.

First, it's further evidence that McCain is at his absolute very worst in responding to a crisis. He and his campaign's initial instincts are always to lash out emotionally and lead with his chin. It doesn't matter if it's a foreign policy crisis (Russia-Georgia), or a gaffe, McCain's trademark is a "reflexive, righteous blunderbuss" reaction that often causes more problems than the initial situation did.

A new . . . survey finds unmarried women overwhelmingly backing Sen. Barack Obama for president, 58% to 29%, "but their commitment to voting lags behind the rest of the country."

Key finding: "It is almost impossible to understand the 'women's vote' without understanding the role marital status plays in political decision-making. Marital status not only drives how women vote, but whether they vote."

For most of Jesse Jackson's life, his trademark declaration — "I am somebody!" — has been self-evident.

But not so much anymore. The rise of Barack Obama and a surge of young leaders in the civil rights movement are raising questions about how big a somebody Jackson really is these days.