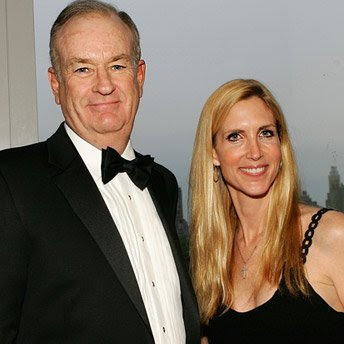 Helen Philpot at Margaret and Helen:

"It’s just not that big of a leap to see a connection between the television news calling someone a Baby Killing Nazi over and over again and some religious fanatic deciding to finally pull the trigger. I get that it is not quite the same as the pie making my ass fat, but I don’t work for Jenny Craig. Bill O'Reilly, however, works for Fox News. The emphasis, of course, is on that last word -- News. He should know better. He is paid to know better. He should be fired for not knowing better.

Fox isn't called the Editorial Channel. Neither is it called the Opinion Channel. Last time I checked it wasn’t even called the I Pulled This Bit of Information Out of My Ass In Hopes More of You Will Tune In Channel. Although, I would push for that last one if Rupert Murdoch put it up for a a vote."

Posted by Shaun Mullen at 12:22 AM
Email ThisBlogThis!Share to TwitterShare to FacebookShare to Pinterest