We did not know that our next-door neighbour keeps doves until he moved the wooden aviary in which he keeps them -- he doesn’t have a dovecote, which would be far more tasteful -- right next to the boundary fence between our properties. There are several doves and some finches in the enclosure, and every little while the doves will go "hoo-hoo-hoo!" quite loudly, sounding for all the world like owls. They certainly do not “coo” as we are led to believe from our long-ago reading of British children’s literature. Restful as is the sound for me seated at my computer, it drives 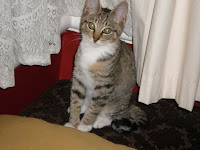 Louis The Cat nuts. He will sit on the boundary fence, or on top of the aviary with his face a few centimetres from the birds, and I swear you can see him salivating. The birds on the other hand, safe behind their wire mesh, simply pay him no attention. Occasionally a finch will shoot panic-stricken away from a dabbing paw outside its haven, but the doves are as cool as ice and rest one-footed on their perches snoozing through it all.

Some of you already know that we have put our home of six and a half years on the market. We have an opportunity to buy a smaller property in Greytown, built of low-maintenance materials and with much less land than we have here. Happily, we have embarked on this change just when it seems the property market is beginning to recover from its 2008 recession. Hardly a day goes by now without another news story about the return of property market activity, and not just here in New Zealand. There are encouraging signs in places like Britain and the USA as well. Above all, here 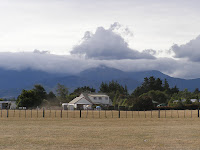 in the Wairarapa there has been quite a reduction in the number of days it takes to sell a property, and there has also been a marked decline in the number of properties being offered for sale, thus bringing the numbers of buyers and sellers into closer balance than has been the case for some time.

At first we listed the house on Trade Me -- New Zealand’s Ebay -- and though a large number of people looked at our advertisement it produced no result. For the last 5 or 6 weeks we’ve had it in the hands of an agent and that has seen a big lift in activity. No sale yet but our confidence is unshaken because those people who have been through the house have offered high praise, and most important of all no criticism of our asking price. So we seem to have pitched the marketing about right.

The last four or five Sundays we have been having open homes, and it is a miracle anyone came out at all. Two Sundays ago we set off in our car to give the agent

untrammelled access to the visitors, and the outside air temperature was 1.5 degrees Celsius (35 degrees Fahrenheit). Now, this happened on the first of June and such temperatures are usually not seen here for at least another month. What’s more, in some parts of Masterton it snowed! Having just had here the coldest May on record it is scarcely a surprise to read that it has been snowing in Nebraska where it is almost summer.

Global warming grinds on its inexorable journey! I wish.

No day goes by without media stories about the "recession" which came upon us all so suddenly. There are some obvious signs that there is a problem, like the collapse of Wellington’s wonderful bookshop Dymocks, which failed after more than 10 years on its present prime site after failing once before on another. There can surely never have been a time when so many retailers are offering such deep discounts, which may contribute to their turnover problem by encouraging customers to wait even longer for prices to fall further.

People seem to believe it is a good time to be a buyer, because except for reasons such as early cold weather they appear to be coming out into the street in droves -- which is one thing, though does not necessarily mean they are opening their wallets. Yet share markets around the world are doing well, there is quite a variety of other "green shoots" such as the property market we have already discussed, and one can't help wondering whether it might not all be over quite soon. We'll see, and I'm glad I don't sell cars for a living, but in the meantime being a pensioner is a reasonably comfortable space to fill.

PS: Another "green shoot" -- news just in. For the second month in a row, New Zealanders have increased their credit card and debit card spending. Bless their cotton socks!

Country Bumpkin is my cousin, a bibliophile and man of the world who lives in New Zealand.

He is the author of Return to the Schilderwald -- A Jew Comes Home After Sixty-Eight Years. Among his other guest blogs are Country Feasts & Festivities, Country Reminiscences, Country Climate Change, Country Reintegration, Country Castles, Country Travel, Country Polikarpovs, Country History, The Country Way of All Flesh, Country Images, Country Winter and Country Ice.