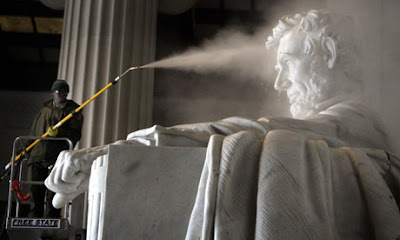 As the author of this guest post and the proprietor of this blog well know, even the greatest writer needs a good editor. Might Abraham Lincoln's Gettysburg Address turned out differently if he had had one?

By MICHAEL REYNOLDS
Here is Lincoln's first draft with italicized comments from a diligent editor:

Four score and seven years ago (This means 87, right? Can't we just say that or are you wedded to this construction?) our fathers (Fathers? Hello? There were no mothers? Someone's sexism is showing. LOL.) brought forth on this continent a new nation, conceived in Liberty (I think the word "conceived" could be ambiguous. Let's not bring sex into it.), and dedicated to the proposition that all men are created equal.(Once again, let's bear in mind that half our audience is female.)

Now we are engaged in a great civil war (Could we substitute "impressive" for "great?" Great almost seems to suggest we're enjoying this civil war.), testing whether that nation, or any nation, so conceived and so dedicated, can long endure. (I feel this construction is needlessly obscure. Can we change to "bringing up the question of how long we can go on like this?") We are met on a great battle-field of that war. (It's not a great battlefield, really, is it? I mean, isn't it kind of awful? Aren't there all kinds of dead people?) We have come to dedicate a portion of that field ("portion" is vague. How about "18 acres?" Or whatever the exact number is? It will help if people can visualize.), as a final resting place for those who here gave their lives that that nation might live. (Please take another look at this sentence. I don't understand what it means.) It is altogether fitting and proper that we should do this. (Redundant. Cut.)

But, in a larger sense, we can not dedicate . . . we can not consecrate . . . we can not hallow this ground. (Then why are we here? You're contradicting yourself. I think you need something more assertive.) The brave men, living and dead, who struggled here, have consecrated it, far above our poor power to add or detract. (They died, right? Can't we just say that they died?) The world will little note, nor long remember what we say here (Well, that's a depressing thought. LOL.), but it can never forget what they did here. (If it can never forget why do we need to state that?) It is for us the living (Well, duh. Unless we're doing Stephanie Meyer. We're not, right?), rather, to be dedicated here to the unfinished work which they who fought here have thus far so nobly advanced. (Two "here's." Echo effect. Cut one. But I like "nobly advanced." Can we move it earlier?) It is rather for us to be here dedicated (Should it be "to be here dedicated" or "to be dedicated here?" Maybe a more active "we're dedicating." Again, we're seeing the word "here" a lot. Could we use "in this place" or "at this location?") to the great task remaining before us -- that from these honored dead we take increased devotion to that cause for which they gave the last full measure of devotion -- (We need to make clear what that cause is. Mention civil war. Or preserving the union. Or freeing the slaves. Whichever you think it is.) that we here (No offense, Abe, but you are stuck on the word "here.") highly resolve ("resolve" can't be modified. You're either resolved or not.) that these dead shall not have died in vain -- that this nation, under God (I understand the shout-out to religious fans, but I think it reads better without this. I worry it will seem like pandering. Let's keep God for the closer.) shall have a new birth of freedom -- and that government of the people, by the people, for the people (Isn't that a tautology? Can't we just say "the government?"), shall not perish from the earth. (This makes me think of Venus and other planets. I don't see this as a sci-fi kind of speech.)

87 years ago we started this country. You could say we nobly advanced it. Now we have this civil war. Let me just say that I am opposed to war. (Wait for applause.) A bunch of people have died. And we should give a shout out to all those guys because they were heroes. (Applause.) And I mean that sincerely. This is holy ground. But if we save the country I think it'll be worth it. Thank you and God bless America. 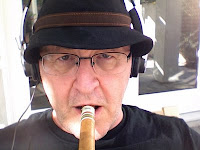 ABOUT THE AUTHOR
Michael Reynolds is a children's book author (under various names), political junkie, former media consultant, foodie and immoderate moderate. He lives in Orange County, California.
Posted by Shaun Mullen at 12:06 AM
Email ThisBlogThis!Share to TwitterShare to FacebookShare to Pinterest