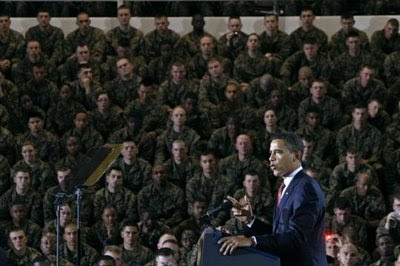 One of the most frequently ground axes by right-of-center commentators is that Barack Obama has weakend the U.S.'s will to fight by accomodating countries like Iran that should be viewed as mortal enemies.

While there is no arguing with the fact that Obama made clear as a candidate and has reiterated as president that diplomacy will once again be part of the U.S.'s foreign-policy kit bag after an absence of eight years, the will-to-fight meme just doesn't add up.

* Obama kept on George Bush's highly regarded secretary of defense.
* He has set an Iraq troop withdrawal timetable, but has made it clear that a substantial number of troops will remain beyond the final withdrawal deadline if necessary.
* He has committed additional troops and resources to Afghanistan and named a tough-minded new commander.

* He has kept defense spending at substantially the same levels.

So where's the beef?

Is putting the U.S. on the side of the people -- those Iranians who voted for change -- instead of kowtowing to the war mongers a sign of weakness? Of course it's not, but that inconveniently undercuts the right-of-center view that a liberal Democrat cannot both work for peace while being prepared for war.

Posted by Shaun Mullen at 12:24 AM
Email ThisBlogThis!Share to TwitterShare to FacebookShare to Pinterest