The State of Play In Iran: Amidst All The Bad, Some Good Finally Is Happening 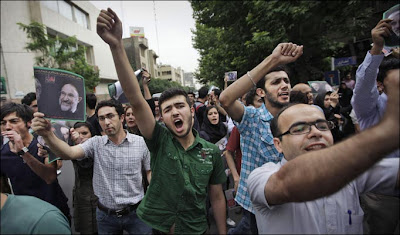 Protests and riots by Mousavi supporters followed his apparent loss

It is easy to read too much into the elections in Iran yesterday. For one thing, the iron grip of the Grand Ayatollah would not have been eased no matter who prevailed. At least not any time soon. But

even though reform-minded Mir Hossein Mousavi apparently lost to inflammatory President Ahmadinejad, the extraordinary turnout and enthusiasm for the challenger by young Iranis was exhilarating. The protests and riots that followed were not, but not surprising given the high expectations and emotional outpouring for the challenger.

Democracy is a fragile creature. The U.S. found that out in trying to impose it at point of gun in an Iraq riven by secular strife. But as the recent elections in Lebanon and now in Iran show, when the people drive the process and don't have it forced down their throats, the results can be positive, especially in a troubled region where the dictator's fist remains powerful.

Of particular pertinence in the U.S. is whether the enthusiasm would have been so high, let alone whether Mousavi could have mounted such a credible challenge, had these elections been held before the ascendancy of Barack Obama.

I don't know, and American navel gazers impose stateside standards on the Iran election at their peril.

But what I do know is that there has to be more than a casual connection between the sense of hope that Obama's victory last November has engendered among many Americans -- and remains surprisingly strong seven months on -- and the sense of hope that the fervor over the Iran vote is generating throughout the Middle East.

U.S. policy toward Iran has been screwed up since Woodrow Wilson was president (that's nearly a century, dudes). And so the combination of an Obama presidency and the extraordinarily high voter turnout yesterday presented a special opportunity to begin to set things to rights. In fact, the only people who were horrified at this prospect before the votes were counted were the ayatollahs and in the U.S. those discredited but reliably bellicose neocons who ever lust for war and didn't want to see Ahmadinejad retired.

Iran's relations with the Arab world have been decidedly problematic, as well.

supporting terrorism if Mousavi had won. Those are prerogatives of the Supreme Leader.

Then there's this: I am so sick and tired of the conflation of "Muslim" and "Islam" with "terrorist" by too many of my countrymen. Those scenes of young people celebrating -- albeit prematurely -- could have been from any American city last November.