Iran & 'The Power Of Millions of Voices' 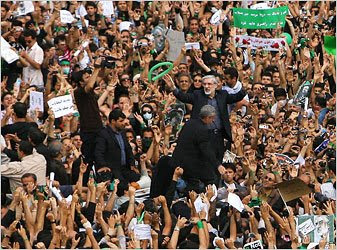 Mousavi leads another huge protest rally on Thursday.
The smartest commentary that I've read or heard on the post-presidential election tumult in Iran is that people should stop yammering and start listening. Having done my share of the

former, I'm making an effort to do the latter.

One further point: Consensus in the American sense of the word doesn't convey a lot of meaning in this situation, but there does seem to be some fairly serious consensus shifting across the political spectrum.

What was assumed to be a totally fraudulent vote outcome may not be; it may well turn out that President Amahdinejad won, although perhaps not by the lopsided margin that the government reported.

And the calls for Barack Obama to do something, anything, up to and including demanding a new 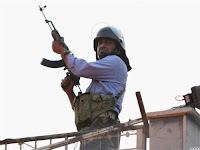 election, seem to have been replaced by the more sober reality that this is something for the Iranians themselves to sort out, and indeed many of them are saying that the U.S. president has hit just the right note and should leave it at that.

It goes without saying that if Obama had taken a more ardently pro-Mousavi line, he would be catching flak from many of the same people who would attack his response as naive "Yes We Can" idealism detached from harsh realities. What is striking is how many of Obama’s more hawkish critics are prepared to argue that U.S. policy should be defined by syrupy sentimentality, hope and a lot of empty talk (all of the things they have accused Obama of offering in the past), while Obama has so far opted for caution, 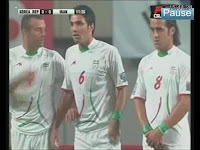 Well, now we know how John McCain would have behaved as president. He would have poured gasoline on a fire.

The proposed [vote] recount could do little more than buy the government valuable time, unless Mousavi chooses to grant it legitimacy. . . . Mousavi’s proposed solution is not a recount, but a cancellation of the results and a new election altogether.

Juan Cole, one of the few knowledgeable American pundits, at Informed Comment:

Is it possible that rural Iran, where less than 35 percent of the country’s population

lives, provided Ahmadinejad the 63 percent of the vote he claims to have won? That would contradict my own research in Iran’s villages over the past 30 years . . . Take Bagh-e Iman, for example. It is a village of 850 households in the Zagros Mountains near the southwestern Iranian city of Shiraz. According to longtime, close friends who live there, the village is seething with moral outrage because at least two-thirds of all people over 18 years of age believe that the recent presidential election was stolen.

Danielle Pletka and Ali Alfoneh of the American Enterprise Institute, in The New York Times:

Just after Iran's rigged elections last week, with hundreds of thousands of protesters

taking to the streets, it looked as if a new revolution was in the offing. Five days later, the uprising is little more than a symbolic protest, crushed by the elite Iranian Revolutionary Guard Corps. Meanwhile, the real revolution has gone unnoticed: the guard has effected a silent coup d'état. . . . [T]he Iranian people will have suffered the consolidation of power by a ruthless regime and the transformation of a theocracy to an ideological military dictatorship. That Iran neither needs nor wants accommodation with the West.

violence. That's why, notwithstanding the opposition's dramatic demonstrations and the regime's brutal but relatively limited repressive measures, both sides have essentially been playing for time. It's as if two armies were maneuvering in close proximity, knowing that the first one to open fire loses

And finally, Andrew Sullivan, whose coverage has been indispensable and vastly superior to most of the mainstream media:

If you weren't aware of what had happened in the weeks before the election, the sudden explosion of outrage wouldn't make much sense. But the expectations were everything. And as Tocqueville understood, nothing is more combustible than the dashing of raised expectations. That's how revolutions happen. But because the MSM hadn't covered the expectations, they had no resources to understand or cover the aftermath of the vote-stealing.

And this is why I remain hopeful. Because the curtain has been drawn back to reveal Iran's wizards of Oz. Because that moment never leaves consciousness. Because, to coin a phrase, "nothing can stand in the way of the power of millions of voices calling for change."