An Ambivalent GM Half-Heartedly Embraces Change It Needs To Survive 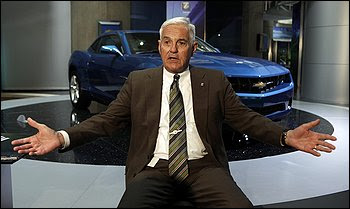 BOB LUTZ AND THE NEW CAMARO

With General Motors fighting for its very life, it's efforts to become profitable again seem ambivalent, if not downright half hearted. Its future would seem to lie with the plug-in electric 2011 Chevrolet Volt, but most of what buzz GM is generating concerns the remake of a muscle car of yore -- the 2010 Chevrolet Camaro with a 400-plus horsepower V-8 engine.

Washington Post reporter Michael Leahy does a terrific job of teasing out the contradictions that are The General, which has seen its market share slide from 54 percent in the 1960s to only 19 percent today. It has been delisted from the Dow Jones industrial average (replaced by Cisco), its stock closed at a pitiful 75 cents a share yesterday and the federal government (which is to say taxpayers) is now the majority owner with a 70 percent stake.

Put another way, if you read only one article on now-in-bankrupt automaker, this is the one.

* Bob Lutz, the executive most identified with GM after President Obama pushed out CEO Rick Wagoner as a condition for continued federal bailout assistant, commissioned the Volt less because he believed in it than as a result of a knee-jerk response: Toyota had stolen a march on the automaker with its popular Pruis hybrid, which GM execs thought was ugly and initially refused to acknowledge was forward thinking.

Lutz, who has poo-pooed global warming, tells Leahy that the Volt "is an important symbol. . . . It has a chance to change our image," but planning for the car wasn't even started until 2006 because GM execs saw it as a money pit and only later realized 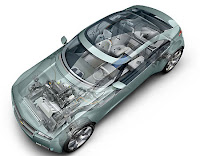 how it had burnished the public image of Toyota's entire product line as fuel efficient even if that were not so.

* The Volt is not even what it purports to be -- an all-electric vehicle -- and while some critics see it as a sign of modest progress, others see it as another half-step in a company prone to half-steps. It also will be pricey: About $40,000 a copy before a $7,500 federal tax credit.

In fact, the Volt has an internal combustion engine dubbed by GM as a "range extender" that supplies electricity to the motor after the vehicle has exhausted its 40-mile battery power range. (During the 1990s, the automaker spent more than $1 billion developing the EV1, a small two-seat electric vehicle before deciding it was

cost-prohibitive and scrapped it to the disgust of environmentalists.)

* With the prodigious profits of the 1960s and 70s -- GM, Ford and Chrysler could set a car's retail price at virtually any amount confident that people would buy it -- came prodigious costs, including union contracts that included guaranteed raises and lifetime health care. At one point, GM alone was responsible for funding more than 1 percent of all U.S. health-care costs.

While auto companies in Japan and Europe became disciples of lean operations, seeing that as the route toward becoming viable competitors, GM kept expanding and produced more brands and more powerful and extravagantly appointed

* No expense was spared during the glory years. Leading entertainers such as Lucille Ball and the Beach Boys were flown to Detroit where they would entertain dealers in a special showroom.

When a former GM design chief proposed a 12-cylinder engine for the Pontiac Firebird and wanted it to sound like a Ferrari V-12 engine, he authorized purchasing a Ferrari engine instead of renting a Ferrari and recording the engine sound.

Wait, that was the wrong reaction.

One of the interesting things is that hybrid cars actually tend to be pretty quick and torque-y. My wife had a hybrid Lexus SUV and I liked it fine.

But while living in Italy for a while I drove a number of diesels. The mileage was supernatural. It was crazy mileage, 40 mpg and more. And yet these were quick, torque-y cars. And they weren't sardine cans. I'm 6'2', 240ish, and if they're big enough for me, they're big enough period.

I don't understand why Europe is driving diesels, getting great performance and amazing mileage, and what we've got is an orphaned plug-in that goes 40 miles before draining out like an electric toothbrush on a three month-old double A.

If mileage with performance is the question, maybe diesel is the answer.