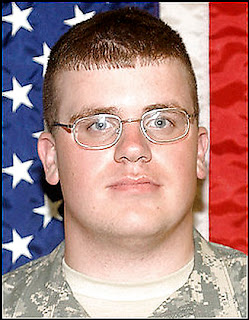 Another of the five soldiers killed as a result of an Al Qaeda-led ambush on May 12 has reached his final resting place.

Murphy was a 2004 graduate of , where hundreds of people gathered in the school gymnasium to celebrate his 21 years of life.

When Christopher was a kid, his older sister Shawna Murphy said, he loved Star Trek and treasured a model of one of the spaceships from the TV show. Her voice cracking, she said that in a fit of adolescent anger, she destroyed it:

"I’m going to always remember him for the depth of love he had for the people around him. Christopher was more generous of a heart than anyone had a right to be."

Murphy's mother, Rosemary Balian, embraced each person who spoke about her son, saying:

"We love him and care for him even though he will no longer be physically here with us.

"We had 21 blessed years with Chris."

She and Darryl Balian, Murphy’s father, were presented the Bronze Star and the Purple Heart for their son’s service, while high school Principal Rob Arnold gave the family a banner that had hung in the school’s cafeteria for students to sign after the news of his death.

The high school will retire number 75, the football jersey that Murphy wore when he played for the William Campbell Generals.

Murphy’s casket, draped in a flag, sat at the center of the gym. A collage with photos of the young man through the years rested nearby. Several bouquets of red, white and blue flowers surrounded the front of the gym.

A seven–member honor guard performed a 21-gun salute, and a bugler played "Taps" before Murphy began his last journey to Arlington National Cemetery.

"To know that our friend will no longer be with us … it leaves a sting in your heart.