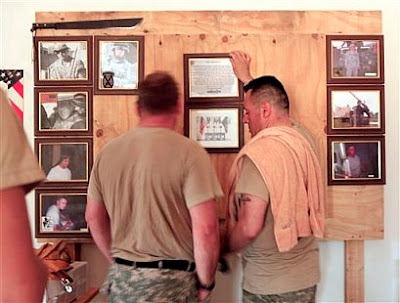 The trail for two soldiers still missing after a May 12 ambush appears to have gone cold.

commanders say they are confident that they have in custody many of the people directly related to the attack in the Triangle of Death, but judging from reduced number of searchers three-plus weeks on, there are no fresh leads as to the whereabouts of Specialist Alex R. Jimenez and Private Byron W. Fouty.

Meanwhile, back at the headquarters of Delta Company, 4th Battalion, 31st Infantry Regiment, a simple shrine made of plywood and two-by-fours has been erected to honor the soldiers killed in the ambush, as well as two others from the unit who died in December.

Sergeant Curtis Dorr, who built the shrine in the former villa turned outpost, wishes it could be grander, perhaps some pieces of felt to hide the knotholes or some trim to make it a more fitting tribute for a Memorial Day ceremony.

"Dorr, 38, of , touched each of the framed pictures and remembered his fallen friends . . .

'They were just kids,' he said, thinking about Sergeant Anthony Schober, 23, of 'Just kids.'

Then he turned to the photo of Sergeant First Class Class James D. Connell Jr., 40, of

It was a rough Memorial Day weekend for platoon leader Lieutenant Morgan Spring-Glace, 25, of His job is to write the letters to the families of his men, but he is struggling with that task:.

"I never thought I'd be in a situation like this.

"One of my men said to me . . . .as we were coming back from this mission that, 'It's like they could come back any time, you know?' I know the feeling. It's like you can just press the button and go back to the way it was."

Lawrence, Massachusetts veterans observed a moment of silence yesterday for one of their own, Specialist Jimenez.

During the city's Memorial Day service at St. Mary's Cemetery, Francisco Ureña, Lawrence's director of veterans, said he had asked a crowd of 200 veterans and their families not to forget Jimenez, 25.

"I told the audience to keep him in their thoughts and prayers," Ureña said.

Photograph by Mary Alleruzzo for The Associated Press