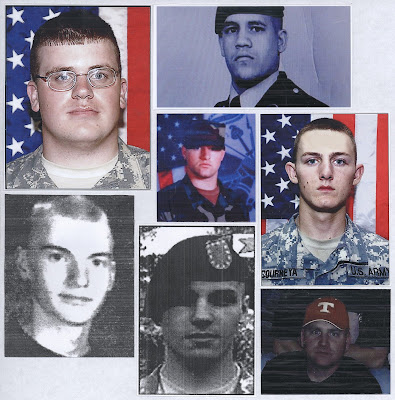 Stiff upper lips are the order of the day, but commanders of the 6,000 troops hunting for three missing U.S. soldiers in the Triangle of Death are clearly worried that nothing has been heard about the men -- no communiques, no videos, nothing -- since the initial Al Qaeda statement that it had the men shortly after they were ambushed and four colleagues and an Iraqi Army interpreter were killed six days ago.

The pace of the search has picked up. Ground patrols wearing full body armor in 100-degree heat are now beating the bush around the clock, and each shift gets only two hours sleep before heading back out. Searching is usually done literally on the run because of fears of remotely detonated bombs.

Damien Cave of The New York Times writes that:

"The stories have come in by the dozens.

"One man swore that he had personally buried two Americans. As soldiers quickly began digging, another man came up and asked why they were unearthing his cousin.

"Other Iraqis have said they saw the Americans walking, encircled by their captors, and still more have fingered people who they thought might have something to do with the ambush . . . "

Al Qaeda and other Sunni insurgent groups have become so interwoven in the towns and villages in the Triangle of Death that separating disinformation from fact or rumor is extremely difficult.

Meanwhile, the Army has identified the fourth soldier killed in the ambush. He is Anthony J. Schober. Identification had been delayed because the attackers apparently had taken Schober's dogtags.

THE MEN BEHIND THE NAMES
Joseph J. Anzack Jr., 20, (missing): Eighteen days after enduring an incorrect report that their private first class son had been killed in Iraq, Theresa and Joseph Anzack are reliving that nightmare all over again.

"He called me up and said, 'Dad, it's me,'" the elder Anzack recalled. "I can't wait for that to happen again."

James D. Connell, 40, (killed): It was a heartbreaking Mother's Day for the family of the career sergeant first class, who grew up in . He had been home on leave just two weeks ago.

Said daughter Courtney: "I'm proud of my dad. He didn't really fight for himself, he fought for the country."

Daniel Courneya, 19, (killed): The private first class was well known and was a member of the track and soccer teams and played clarinet in the band at .

His death was announced over the school's public address system, and a moment of silence was observed. Students put together a tribute of photos, posters and a picture of him in uniform.

Courneya's mother, Wendy Thompson, said she signed the papers to allow her son to enlist at age 17, directly out of high school. Her husband returned Tuesday from Iraq. She said he would be staying home for good now.

Byron W. Fouty, 19, (missing): Fouty earned his GED before enlisting in the Army while living with a friend's family in . He had only been in a few weeks.

Cathy Conger, the friend’s mother, said Fouty was very well mannered and had looked forward to being deployed. "He wasn't scared. He was real brave about it."

Alex Jimenez, 25, (missing): The specialist was born in the and lived in before moving to , where he attended school.

At St. Mary of the Assumption Church in Lawrence, the Rev. Jorge Reyes recited prayers for Jimenez, saying, "We place our hope in God to keep him safe and that he may return to his family soon."

"We'll continue praying for him and his family," Reyes said. "We cannot let go of our prayers, faith and hope so he can be safe and protected."

Christopher E. Murphy, 21, (killed): Murphy’s family said that the private first class still had an aura of innocence about him and was crazy about video games. He returned to in February and planned to make the Army his career and get a college education.

He asked family members to send candy he could give to Iraqi children, who he said would sometimes reveal hidden explosives in return.

Anthony J. Schober, 23, (killed): The sergeant joined the Army four and a half years ago to fight the Talaban after the 9/11 attacks, but went straight to out of boot camp. He was on his third tour there and was leading the squad that was ambushed.


Schober's platoon leader described him as a "tall, goofy kind of guy" with incredible energy and a powerful sense of humor.

The Talking Heads Song "Life in Wartime" has been trapped in my brain for the last few days, notably the immortal lyrics “This ain’t no party, this ain’t no disco.”

As has the realization that the massive search for Anzack, Fouty and Jimenez may well end in failure.

Ralph Kinney Bennett, whose political views I do not necessarily share, nevertheless taps into this feeling in a post over at TCS Daily:

"Even as we pray for those three missing American soldiers we are prepared for the worst.

"They are not prisoners of war; that is, their capture was not a happenstance of battle. . . .

They were kidnapped, sought out as Americans for the purpose of embarrassment, humiliation, torture, and finally death and mutilation as a horrific lesson to the ‘Crusaders’ and to the world."

* * * * *
Click here and here for previous Kiko's House reports on the hostage search.