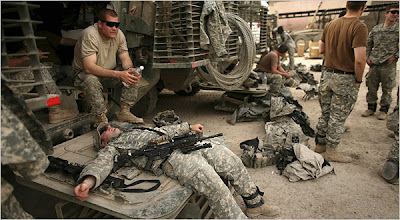 As the search for the two soldiers still missing after a May 12 ambush entered the third week, and Iraqi commanders said their troops have detained 16 people directly related to the attack.

Three men disappeared after Al Qaeda-led insurgents attacked a military observation post in the Mahmoudiya area of the Triangle of Death. Four American soldiers and an Iraqi Army interpreter were found dead at the scene and three soldiers were kidnapped.

The body of one of the three missing soldiers was found floating in the Euphrates River on Wednesday, and an intense search continues near the river for the other two men, Specialist Alex R. Jimenez, 25, of Lawrence, Massachusetts, and Private Byron W. Fouty, 19, of .

Troops have detained scores of people during the dragnet and have released all but 100, who remain in and Iraqi custody.

They found 14 weapons caches and 3,000 pounds of explosives and ammunition, much of it buried in 55-gallon drums, the military said. The fish farms, fed by the two main canals in the area, were not operational.

Elements of the 4th Battalion, 31st Infantry Regiment and Iraqi soldiers searched along the , two miles south of where the attack took place.

The location may have been a crossing point to transport the missing soldiers from one side of the river to the other.

The ambush that precipitated the kidnappings was on a small outpost that is an example of a risky new counterinsurgency tactic in the war which emphasizes pushing soldiers out of safe bases into local communities.

of The New York Times from Mahmoudiya:

"Whether this new plan will work remains an open question. The number of bombs found or detonated here has declined since last fall, and soldiers are finding nearly 6 in 10 before they go off, according to figures from the brigade in charge of the area. Some troops, placed in villages where strict Islamic law was enforced, also say they have brought stability and more freedom to local residents.

"But military officials acknowledge that this new dispersal strategy is risky. Their forces, they say, are not numerous enough to control the entire area. And insurgents have begun adjusting to the new American strategy with deadly sophistication, coordinating complex assaults on isolated troops and placing explosives where foot patrols will likely cross. In many ways, the soldiers’ experiences at these outposts demonstrate how every new American tactic provokes an equally new and deadly response."

As is often the case, the struggle comes down to resources and terrain.

The Second Brigade Combat Team of the 10th Mountain Division, with about 3,200 soldiers, covers the Triangle of Death around Mahmoudiya, Latafiya and Yusifiya. The area is roughly the size of with 400,000 people, and is difficult to manage, commanders said, because residents are spread across hundreds of farms.

"The Iraqi Army plays an increasingly prominent role here but some military analysts question whether there are enough American troops to keep any kind of peace or to keep insurgents from feeding bombs and weapons into ."


Photograph by Michael Kamber for The New York Times