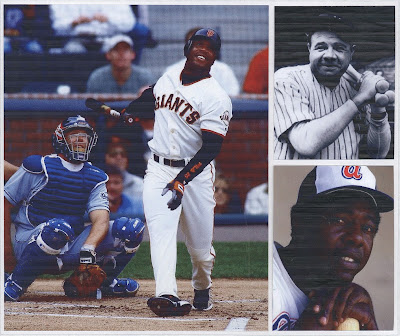 BONDS, THE BABE AND HAMMERIN' HANK
There is nothing in the hallowed 131-year history of major-league baseball – and for that matter sports, period -- more sacred than the all-time career home run record. And no contemporary player who is more controversial than Barry Bonds.

So buckle your seat belts, sports fans, because there's going to be a godawful collision next month when Bonds is expected to break Hank Aaron’s record of 755 career home runs.

Here’s why the collision will be a perfect sports storm:

Just as Aaron was both adored and reviled when he broke Babe Ruth’s 39-year old record of 714 home runs in 1974, so will Bonds.

Bonds, like Aaron, is black, and some of the enmity for both stars was and is racially driven. But unlike Aaron, a clean living hard hitter, Bonds has been dogged by allegations that his run for the record books has been helped by performance-enhancing drugs. The storm will be all the more intense because the major league establishment has been painfully slow to acknowledge the drug problem in its midst and maddenly ambivalent about how to deal with it.

It hasn’t helped that Bonds has long had a problematic relationship with fans and sportswriters alike. Unlike Aaron, or for that matter Ruth, he just isn’t a particularly friendly person and has been far more focused on succeeding on the field than kissing ass off of it.


SHOULD BONDS’ RECORD HAVE AN ASTERISK?
Baseball statistics would seem to cry out for asterisks (*) to call attention to important differences in the circumstances under which, for example, Slugger B broke a record set by Slugger A.

Aaron, who played 22 seasons in the majors, most of them as an outfielder with the and Atlanta Braves, had nearly 4,000 more at-bats than Ruth. The Babe played 21 seasons, mostly with the New York Yankees, but the first several seasons exclusively as a pitcher. (Bonds has a little more than 9,600 at-bats in 21 seasons, most of them as a leftfielder with the San Francisco Giants.)

But baseball is an asterisk-free sport. Records go into the books regardless of at-bats, length of season and myriad other factors. That is as it should be.

Pete Rose, who has admitted to betting on his own team as a player and manager, does not have asterisks next to his many records. That also is as it should be.

Nevertheless, there are a goodly number of folks who think that an asterisk should be appended to Bond’s future all-time home run record because of allegations that he played while juiced on steroids and other performance enhancing drugs. Which, they claim, is why he still is batting the ball out of the park with regularity at 42, an age when most sluggers are running car washes and signing autographs at baseball memorabilia shows.

Bonds is indeed a key figure in the BALCO scandal, but has never failed a steroid test nor been charged with any crime in connection with drug abuse.

But Bonds' one-year, $15.8 million contract with the Giants was delayed last winter partially because of language pertaining to an escape clause if he was unable to play because of legal issues. He remains the target of an ongoing federal perjury and tax evasion investigation, and his personal trainer has been in prison since November on contempt charges for refusing to answer grand jury questions about his boss.

It is highly likely that Baseball Commissioner Bud Selig would suspend Bonds if he is indicted.

RACE AND RANK HYPOCRISY
ESPN.com columnist Jemele Hill notes that when Bonds breaks the record it will be like the “O.J. Simpson trial all over again.” Presumably without a double homicide. And a recent ESPN/ABC News poll found that black fans are more than twice as likely as their white counterparts to want Bonds to break the record and nearly twice as likely to think that he has been treated unfairly.

There is a lot to that and I suspect some white fans veil their darker feelings for Bonds by calling him a cheater. We’re told Americans don’t like cheaters, although surveys show that most of us have done so at one time or another.

As it is, no white players accused of using performance-enhancing drugs, including Mark McGwire and Jason Grimsley, have gotten anywhere near the heat that Bonds has. That also goes for Jason Giambi, who had the cojones to acknowledge steroid use, and Latino sluggers Sammy Sosa and Jose Canseco, as well.

The drug controversy has focused almost exclusively on power hitters because of the dramatic rise in home runs since 1995. It probably is no coincidence that McGwire, Sosa and Bonds have all surpassed the record set by Roger Maris, whose 61 homers in 1961 had not been challenged for over 30 years.

But there is another factor that is overlooked: Pitchers are more frequently linked to performance-enhancing drug use in recent yearsthan position players these days.

How many of the home runs Bonds has hit were served up by juiced pitchers?

LITTLE EXCITEMENT
We have come far since the night in April 1974 when Hammerin' Hank Aaron hit a ball served up by Los Angeles Dodgers pitcher Al Downing into the Braves bullpen at Atlanta Fulton County Stadium to become the all-time home run leader.

The achievement was all the more noteworthy because of Aaron’s struggle against racism. He broke into baseball only seven years after Jackie Robinson, the first black to play in the big leagues, and received numerous death threats as he closed in on Ruth’s record.

Today baseball arguably is color blind on the field, although not necessarily so in the front office. Fans were surprisingly forgiving of a crippling player’s strike that decimated the 1994 season and attendance has remained robust during the various drug scandals.

A no-hitter or rare perfectly pitched game still elicit excitement. The New York Yankees-Boston Red Sox remains the greatest rivalry in American professional sports. Introducing children to the joys of the big-league game, as I did for my children and my father for his, remains a rite of childhood passage.

Yet there is little excitement about Barry Bonds’ bid for immortality.

While the sports networks will break away for every Bonds at bat as he closes in on the record, Aaron and Selig say that they might be elsewhere when Bonds hits career home run No. 756. Note that Aaron and Selig are close friends. But also note that former Commissioner Bowie Kuhn’s refusal to be in the stands when Aaron broke The Babe’s record in 1974 had racial overtones, and without a convincing reason from Selig his absence will, too.

I am no fan of Bonds, although I adored his father, Bobby Bonds, who also was a Giants star. If you take away the juicing allegations, which I happen to believe are true, the sentimentalist in me will applaud Bond’s achievement.

But it will be the sound of one hand clapping.

Posted by Shaun Mullen at 3:55 AM
Email ThisBlogThis!Share to TwitterShare to FacebookShare to Pinterest

You guys seen the game, unbelievable, Dodgers is my best team in the MLB. I wish I could go to watch all their games but ticket prices this season are getting very pricy. Brokers made the game hard to attend. Well talking about Brokers. I found a new web site where you can compare Los Angeles Dodgers ticket brokers, the site is
http://www.ticketwood.com/mlb/LosAngeles-Dodgers-Tickets/index.php . Well I hope this will be helpful for you guys. Go Go Dodgers. Keep me updated Great blog!!!

Here is a poll for you: Should Hank Aaron's record stand in MLB if Barry Bonds hits more home runs?