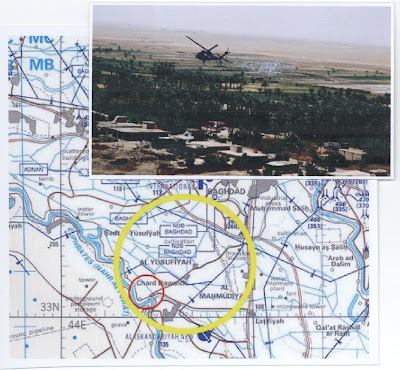 Hope is not a method in this operation. It's our duty.
-- Colonel Michael Kershaw

There is probably no non-urban area in Iraq more challenging to conduct a search for captured soldiers than the Triangle of Death.

The triangle is crisscrossed by irrigation ditches and canals that flow from the , which makes the dragnet for three U.S. soldiers abducted a week ago by an Al Qaeda-led ambush party extremely difficult.

The fertile region is dotted with family-owned farms growing barley and wheat, date palm groves, villages and small towns like Cargouli, where the ambush took place, and occasional mansions that once belonged to Saddam Hussein loyalists.

But the biggest reason is that the area southwest of – not to be confused with the larger Sunni Triangle -- is not called the Triangle of Death for nothing.

From the outset of the war, the American presence has been deeply resented and there have been innumerable clashes between the occupiers and the occupied, as well as suicide bombings at mosques and other high-profile targets.

While there are Shiites living in the triangle, Sunni tribes proliferate. Their hatred of the Shiite-dominated central government in runs deep and willingness to allow insurgent groups, more recently and most prominently including Al Qaeda, to roam freely through the area is unbounded.

The insurgents, in turn, have imposed their strict brand of Islam through murder and intimidation, and weakened the authority of tribal sheiks.

* There is a seemingly endless supply of weapons looted from ammunition depots in the region before American forces focused on finding WMD could secure them.

* After the invasion, the economy of the region collapsed and there are no economic alternatives to joining the insurgency, so many young men have done so.

The has had to maintain a large counter-insurgency force in the triangle because of its proximity to and the presence of the Musayyib Power Plant, a frequent target of insurgent attacks because it can supply a third of all of ’s electricity needs. The plant has not operated at anywhere near full capacity since the March 2003 invasion.

* * * * *
Al Qaeda in Mesopotamia, as the group formally calls itself, has not been heard from since shortly after the ambush last Saturday, nor has any video of the hostages been aired.

That may be as simple as the fact that a courier bearing a videotape has not been able to make it through the American and Iraqi cordon to a site where it can be broadcast, but the silence at this point is deafening.

Bill Roggio reports that the trail seems to have gone cold and the search area has widened. That is not a good sign.

Al Qaeda originally said that the ambush and abductions were in retaliation for the March 2006 rape of 14-year-old Abeer Qassim Hamza al-Janabi and murder of her family near Mahmudiyah, a village in the southeastern corner of the triangle.

In June 2006, Al Qaeda insurgents kidnapped, tortured, beheaded and booby trapped the bodies of two of Green's comrades, having killed a third soldier earlier, all in what the insurgents asserted was revenge for the rape-murders.


Friday: Who Are the Dead and Missing Men?
Thursday: Has the Search Impacte don the Surge?
Wednesday: Anatomy of An Abduction & Search

U.S. Army photograph
Posted by Shaun Mullen at 5:21 AM
Email ThisBlogThis!Share to TwitterShare to FacebookShare to Pinterest