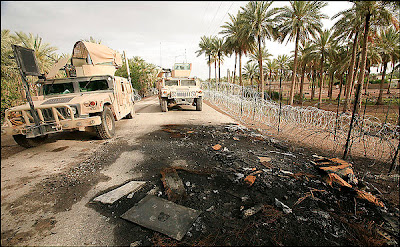 Blackened asphalt, debris show where insurgents sprung ambush
A massive dragnet entered its second week today with no indication that searchers were any closer to finding three soldiers kidnapped after an ambush in the Triangle of Death, but there was a flurry of reports that it is believed two of the three men are alive.

Meanwhile, families of the four men killed in the attack prepared to bury the dead, families of the missing men prayed for their safe return and cities and towns, including my own, held Memorial Day parades.

Seven days have passed since a communique from Al Qaeda in claimed that the group had captured the three men. No video showing their quarry has been broadcast, the insurgents' usual modus operandi, an aberration which is a cause for hopefulness because captives’ survival chances typically decrease once propaganda tapes are released.

But then there is nothing usual about this kidnapping and search.

The operation has taken on an enormous urgency coming as it does amidst implementation of President Bush’s do-or-die surge strategy, a restive Congress and public that has turned increasingly against the four-plus year war, which has taken 3,415 American lives, including two of the searchers.

Some 6,000 American and Iraqi troops, backed by substantial air support, have scoured the Triangle of Death hard by the Euphrates River southwest of Baghdad. Because of concern that the captors slipped the cordon, the search area has been extended to the Amiriya region in eastern Anbar province about 25 miles northwest of the triangle.

The area has been a hotbed of Al Qaeda and other insurgent activity. It was initially thought the kidnappers would travel there, and Marines had thrown up roadblocks and checkpoints immediately after the ambush and capture on May 12.

Bill Roggio reports at The Fourth Rail that:

"The widening of the search beyond the Triangle of Death region may be a sign the military is unsure of the location of the missing soldiers. . . . But information has been uncovered that leads Multinational Forces Iraq to believe the soldiers are still alive."

In an interview with Sean Naylor of the Army Times, General David Petraeus stated he has detailed and specific information on who conducted the attack and kidnapping, and that at least two of the missing soldiers are believed to be alive:

"We know who that guy is [who was behind the attack] . . . He’s sort of an affiliate of Al Qaeda. He’s the big player down in that area. We’ve tangled with him before . . . Somebody’s given us the names of all the guys that participated in it and told us how they did it, and all the rest of that stuff . . . Now, we have to verify that at some point in time, but it sounds spot on. We’ve had all kinds of tips down there. . . . We just tragically haven’t found the individuals. But on the other hand, they haven’t been able to smuggle out, at least to my knowledge, the traditional video . . . As of this [Saturday] morning, we thought there were at least two that were probably still alive . . . At one point in time there was a sense that one of them might have died, but again we just don’t know."

A lot of ands, ifs or buts to be sure. But interrogations and information from informants indicating that at least two of the men are not dead, coupled with the protracted silence of the captors, provides a reason for hope.

Meanwhile, CNN reported that various military items, including parts of uniforms, have been recovered that could provide clues about what happened to the soldiers.

"Any potential evidence we find in the field is being tested for connection to the missing soldiers. If and when that evidence is determined to be definitely connected to the search, and after we have exploited all possible intelligence, we will discuss it."

Bombs buried far from roads have been a constant menace to searchers.

The New York Times reported that at least four of IEDs have hit foot patrols, and the only two soldiers known to be killed during the weeklong hunt died after stepping on or near bombs that commanders describe as an effort to scare them back into their Humvees.

Blogger Robert Lindsay says that Cargouli (alternately spelled Quarghuli or Kargol), the town where the ambush occurred and the three soldiers were taken hostage, is an Al Qaeda regional headquarters of a sort and not uncoincidentally where Stephen Tucker and Christian Menchaca were ambushed, kidnapped, tortured and beheaded in June 2006.

The ambush and killings were said to be in retaliation for the March 2006 rape of 14-year-old Abeer Qassim Hamza al-Janabi and murder of her family near Mahmudiyah, a village in the southeastern corner of the Triangle of Death.

Lindsay also provides a detailed look at insurgent and tribal allegiances in the area and links to a January 2006 New York Times story that includes an account (toward the bottom) of an insurgent feud in Cargouli.


Saturday, May 19: The Challenging Triangle of Death
Friday, May 18: Who Are the Dead and Missing Men?
Thursday, May 17: Has the Search Impacted on the Surge?
Wednesday, May 16: Anatomy of An Abduction & Search

Photograph by Maya Alleruzzo/The Associated Press
Posted by Shaun Mullen at 5:03 AM
Email ThisBlogThis!Share to TwitterShare to FacebookShare to Pinterest