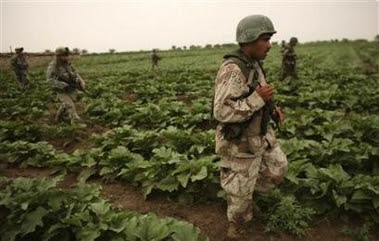 10th Mountain Division soldiers search for hostages in Rashdimullah
There is no delicate way to put it: With every passing day, the possibility that the three American soldiers abducted in an ambush nine days ago will be found alive grows slimmer.

This much is certain:

military intelligence has a basic understanding of the insurgent network behind the ambush in the Triangle of Death on May 12 that left four soldiers and an Iraqi Army interpreter dead and three missing.

* Given that the search area has been widened beyond the triangle, intelligence does not include where the hostages are being held. Assertions by General David Petraeus and several of his commanders over the weekend that two of the three men are alive did not include how old that information may be.

The silence from Al Qaeda in , the group that took credit for the ambush-abductions, is deafening. No photographs or videotapes of the three men, let alone follow-up statements, have been released since an initial statement and brief follow-up warning in the hours after the incident that forces should not come after the hostages.

Meanwhile, several jihadi websites reported that American forces found the headless bodies of two of the kidnapped soldiers on May 18. The reports have not been confirmed and the date precedes General Petraeus' remarks.

More than 700 people have been detained for questioning since the search began. Two American soldiers have been killed during the dragnet, and another seven died elsewhere in Iraq on Sunday, bringing the May death toll to 71 and the overall total to 3,422.

The Associated Press reported that the search, which is being conducted in 100-degree-plus heat, is straining troops already stretched by the surge:

"Firefights erupt daily as troops search a 135-square-mile area south of the capital. Roadside bombs hit armored Humvees. The troops have taken to walking but the fields are heavily mined. Still, the military insists it won't quit until it finds the missing men, or knows what happened to them."

Never mind that large parts of Baghdad still don't have electricity most of the time four years after "Mission Accomplished." The air conditioning works just fine at Foreward Movement where Jules Crittenden hangs out.

"More than a week of intensive operations, up to 6,000 troops, often on foot, presenting themselves as targets everywhere, and only two Americans reported killed in the search area as of last night, out of two dozen Americans killed in Iraq in that time. That’s remarkable.

So much heat on al-Qaeda in the Triangle of Death they can’t get a jihadi video out. Hundreds questioned and/or arrested, several large weapons caches seized, a number of suspected insurgents killed in firefights. But mostly, it would appear, al-Qaeda gone to ground . . . after demanding that the searching stop.

So is anyone on the ground looking seriously at whether, absent as yet the safe return of the abducted soldiers, there is a payoff to this intensive search, something that might be applied elsewhere?"

Well, not really, but it is easy to blog from a Barcalounger and not let the big picture cloud an already made-up mind.

The ambush and abductions did not occur in a vacuum.

The surge is not merely in but rather extends throughout the-so called Baghdad Belt, which includes the Triangle of Death southwest of the city and eastern Anbar province west of the capital.

Whether the insurgents couldn’t get a video out, their camcorder broke or whatever is problematic. The surge was well under way, albeit actually ahead of schedule in the area where the May 12 hostage snatch occurred. What Crittenden suggests "could be applied elsewhere" already is being applied elsewhere.

I sure hope that Crittenden's inference that the U.S. should declare victory in the triangle (never mind that there still are three troopers missing) is borne out. It's just that among my sources, none of them running dogs of that negative mainstream media he so regularly takes to task, there is a palpable if unspoken sense of doom and gloom.

Sunday, May 20: A Flicker of Hope But the Trail Goes Cold
Saturday, May 19: The Triangle of Death Up Close
Friday, May 18: Who Are the Dead and Missing Men?
Thursday, May 17: Has the Search Impacted on the Surge?
Wednesday, May 16: Anatomy of An Abduction & Search

Photograph by Reuters
Posted by Shaun Mullen at 5:04 AM
Email ThisBlogThis!Share to TwitterShare to FacebookShare to Pinterest