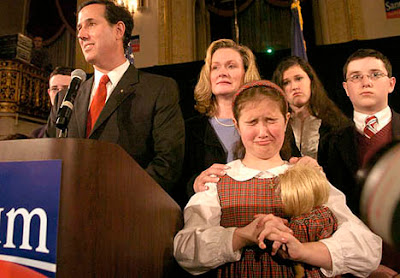 SANTORUM AFTER HIS 2006 DEFEAT

It matters not that Rick Santorum, who is the right-wing Republican flavor of the moment, doesn't stand a chance of becoming the GOP presidential nominee let alone beating Barack Obama. What matter is that Santorum has never gotten the kind of scrutiny that he deserves with the exception of one reporter working for one newspaper.

That reporter is my good friend Will Bunch and the newspaper is the Philadelphia Daily News. Bunch, among the most savvy political reporters and commentators of the era, arrived in town a few months before Santorum became Pennsylvania's junior U.S. senator.

While Will has covered all of the over-the-top stuff, including Santorum's "Google problem," his claims that Boston liberals caused the Roman Catholic Church sex abuse scandal, that President Obama should be against abortion because he is black and abortion is like slavery, and so on and so forth.

But Will writes that Santorum's Culture War bluster obscures some very unpleasant facts:

* He founded Operation Good Neighbor, a faith-based urban charity, in 2000, but most of the money went not to community groups but to salaries, rental fees and consulting fees to a network of politically connected lobbyists, aides and fundraisers. Responsible charities dole out at least 75 percent of their incme in grants, while Operation Good Neighbor provided a mere 36 percent. It was disbanded in 2007 after Will reported that it was a bit of a scam and had never registered with the state of Pennsylvania as is required under the law.

* His America's Foundation PAC spent only 18 percent of the money it raised to fund political candidates, far less than the norm and spent most of it on shopping trips for he and his family.

* He financed his large Leesburg, Virginia home with a $500,000 mortgage from a private bank run by a major campaign donor that was supposed to be open to high-wealth investment clients and not Santorum and the general public.

* He make considerable political hay by visiting the deathbed of Terri Schiavo, the woman at the center of a national right-to-die controversy, but the real reason he was in the Tampa, Florida area was to collect money at a $250,000 fundraiser organized by Outback Steakhouse execs who shared his passion for low minimum wages to waitresses and other rank-and-file workers. He flew in and out of the area on a WalMart corporate jet.

* While he listed his legal residence as a small house in the Pittsburgh suburb of Penn Hills, he raised his family in northern Virginia and cyberschooled five of his children in the Penn Hills school district, which cost it $72,000 in cyberschooling fees. The cash-strapped district was unsuccessful in its efforts to get any of the money back.

* He accepted campaign contributions from Big Pharma and consistently voted their wishes. When he was defeated for a third Senate term, an internal memo at drug giant GlaxoSmithKline said his departure from Washington "creates a big hole that we need to fill."

* He insists that his political values are guided by his religious values but has not disclosed his ties to ultra-conservative movements within the Roman Catholic Church, including the secretive group known as Opus Dei.

* He boasts of an immigrant grandfather who worked in Pennsylvania's coal fields but himself made $970,000 in 2010 despite not having a steady job.

To summarize, Santorum has always put his interests first, has loose ethical standards and has devoted his career not to the social causes that he espouses but in looking out for big corporations and the wealthiest of Americans.

If only he could be as awesome as Barack Obama. I'm sure Obama doesn't take money from big corporate donors. I bet Obama has been super open about where he's from. And I'm sure Obama has never even made close to $970,000 in a year. Darn that Rick Santorum!!!