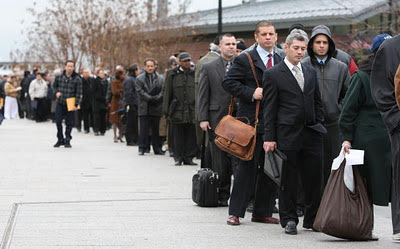 Homecomings for returning combat veterans have never been easy no matter the war, but the flood of Iraq war veterans who will be mustered out in the coming months, as well as a fair number from the Afghan war, pose a huge challenge. This is because gratitude, and Americans certainly are grateful, will not pay the bill.

That bill is formidable:

* About 800,000 veterans are jobless and many newly discharged veterans worked in depressed industries like manufacturing and construction prior to enlisting.

* One in every three homeless adult men is a veteran.

* The veteran population, like the general population, is living longer, and the number of veterans aged 85 or older is expected to grow by 20 percent in the next decade.

Then there are less visible obstacles to reentering civilian life: The inordinate number of veterans with Post-Traumatic Stress Disorder and severe neurological and other injuries that probably would have killed them in earlier wars before the extraordinary advances in battlefield triage, evacuation and surgery techniques.

Meanwhile, there is good news and bad news when it comes to veterans benefits.

The good news is that although there have been some small fee increases for veterans covered by the military health-insurance program, significant cuts to veterans' benefits are unlikely and efforts largely led by Republicans to chip away at them won't go anywhere.

The bad news is that the enormous growth of the Veterans Administration's budget, which more than doubled over the last decade, will not continue and the VA will feel the impact of the mandatory defense cuts that kick in because the budget deficit supercommittee failed to reach agreement.

The numerous government programs designed to get veterans back to work have been less than successful.

With the exception of the Post-9/11 GI Bill, signed into law by President Bush and which helps more veterans go back to school, is working, but President Obama's Council on Veterans Employment is not despite the fact that the federal government hired over 70,000 veterans in both 2009 and 2010. This is because employers are doing little hiring, veterans or otherwise.

In November, Obama signed a bill offering tax credits to employers who hire unemployed or disabled veterans, but it is much too early to tell whether this will improve the jobs picture.

Anonymous said...
This comment has been removed by a blog administrator.
7:29 PM

And what about those of us who are already out of work or underemployed.

This is a real mess.

I'm glad the troops are coming home, but a better stimulus would be to keep them doing something in the military. Heck, they could help out on the boarder.