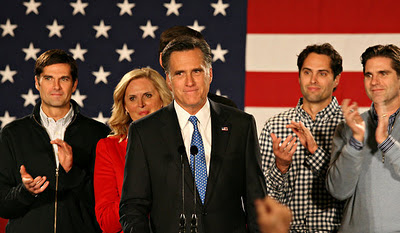 The three top finishers in the Iowa caucuses tell you all you need to know about the Republican Party in 2012: Mitt Romney, who disavows his greatest accomplishment; Rick Santorum, whose compassionate conservatism does not allow room for anyone not sharing his extreme right-wing views; and Ron Paul, whose sensible ideas keep getting trampled on by wacky ideas tinged with racism.

At first glance, Romney's hair's breadth 8-vote win over Santorum is a surprise considering the fact that Iowa Republicans are an extremely conservative lot who had an awful time making up their minds and in the end gave 46 percent of their votes to Santorum (25 percent) and Paul (21 percent).

But methinks that even some of these Tea-hadists realized that only Romney (25 percent) stands a chance of unseating our socialist president. That noted, he received only 67 more votes than he did in 2008 despite having campaigned for months in the Buckeye State and is the weakest party front runner since Bob Dole in the 1996 Republican primaries.

Yet when you consider the competition, anything but a Romney win -- or in this case pretty much a draw -- would have been disastrous. This is because the competition has taken turns beating up on each other -- and in the case of Rick Perry, on himself in what may be the most inept run since the somnambulant Fred Thompson in 2008.

One by one, nearly every threat to Romney has been eliminated: Tim Pawlenty by Michele Bachmann, Bachmann by Paul and Herman Cain by his own hand. Gingrich likewise. Meanwhile, Paul's finish in the caucuses will have been his best. That probably also is true for Santorum, neither of whom would have gotten the nomination let alone be remotely electable.

(Incidentally, by one calculation Santorum spent $1.65 per vote while Romney spent $113.07 and Perry an astonishing $817. And for all the talk of a fired-up party base champing at the bit to take down the president, turnout was only slightly higher than in 2008 overall, which accounts for Democrats and Independents who caucused with the Republicans, while the actual Republican turnout dropped from 102,000 in 2008 to 91,000 last night.)

It will be interesting to see who remains on board as the Republican clown car heads to New Hampshire.

Bachmann, who finished dead last, quit today and Perry, who finished just ahead of her, is likely to also do so. Will they endorse Santorum and if so will that make a difference in New Hampshire, which is far less socially conservative than Iowa? Probably not, nor will expected endorsements of Romney by John McCain and other party moderates matter much.

Presuming that Romney is the eventual nominee, which has only happened in two of the last five presidential caucuses (McCain finished a distant fourth in 2008 and Romney even further back), let's focus on his electability against a tenacious and still popular Barack Obama, who pushed through health-care reform, saved the domestic auto industry, ended the Iraq war, took out Osama bin Laden and has refashioned U.S. foreign policy.

Romney is not electable because:

* He is not a likable person. He lacks charm, does not inspire or quicken the pulse when he steps up to the podium, and does not have a cult-like following like many of his opponents.

* He is a poster child for capitalism run amok. His tenure at Bain Capital, where he specialized in raping companies for profit while screwing workers, made him filthy rich and he will be an easy target for an incumbent who is running a populist campaign.

* He can't win in the South. The key to a GOP victory in November is sweeping the South and attracting enough independent voters, and while he might have some success with the latter, some Southern Republicans may prefer to stay home than cast their ballots for him.

* He is a flip-flopper of monumental proportions. Beginning with health-care reform, which was his signature success as Massachusetts governor, he has reversed field, sometimes repeatedly, on virtually every major issue and voters are rightly confused about what he stands for.

* He is a Mormon. His faith should not be a disqualifier, but will be for some voters who believe that the Church of Latter Day Saints is a cult. Because their minister told them so.

* He is a political loser. He got clobbered by Ted Kennedy in 1994 and while winning in Massachusetts in 2002, he did so with less than 50 percent of the vote and according to one poll left office as the 48th most popular governor who would have been easily defeated had he run for re-election.

Finally, Obama will be running this time as an experienced candidate with all of the assets that incumbency brings to the campaign trail.

Obama's advisers have quietly assembled another massive campaign organization, he is raking in tens of millions of bucks in contributions, and while some voters may not be as enthusiastic about him as they were in the run-up to the historic 2008 election, Romney is not a viable alternative for many independents.

The unrelenting extremism of the Iowa field, from the candidates' absurd stands on issues that matter to middle class voters to an oblique racism when it comes to Obama himself has forced Romney to tack ever harder to the right. It will take the biggest flip-flop of them all for Romney to reposition himself as a moderate and not the sell-out that he has become if he gets the nomination because otherwise he doesn't stand a chance.