On Past New Hampshire: Why Romney Is Unemployable, Including As President 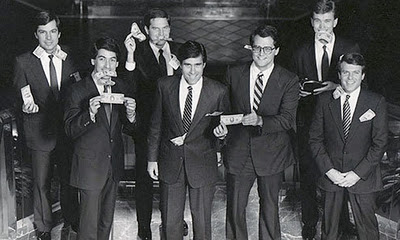 ROMNEY AND THE GANG AT BAIN CAPITAL
The clashes over class warfare that have bubbled to the surface as the Republican Party scrambles to anoint a challenger to President Obama is a healthy sign that addressing real issues is not completely dead, although the warfare happens to be for the wrong reasons. To find the right reasons, you have to turn to the guy who is likely to have his lease on the Oval Office extended.

This is because Republicans -- both in Congress and out on the primary campaign hustings -- have handed Obama a talking point from heaven that is making Karl Rove apoplectic and has Lee Atwater spinning in his grave: The GOP, practically to the last man (and boy do we miss Michele and Sarah), have been relentless in disparaging the middle class, the elderly, the poor and the ill and infirm while at the same time making kissy face with the rich and big corporations.

This makes Mitt Romney, who was born on third base with a silver spoon in his mouth, the perfect target for Obama and the other Republicans that lust for the Oval Office.

The piling on has been merciless and all the more so because of Romney suddenly become gaffe prone when it comes to his privileged self.

It is bad enough that, in a rare if unintended moment of candor, he declared that only rich people should run for president and followed up that stinker by sticking his other foot in his mouth and bragging that in 1996 he ran a campaign so opulent that Ted Kennedy was forced to mortgage his house to keep up with him.

And it matters not whether Romney's recent remark that "I like being able to fire people who provide services to me" has been taken out of context. (It was bad enough in context.)

As CEO of Bain Capital, which specialized in buying and then gutting companies, firing employees by the thousands and in some cases then rehiring them at lower wages and with fewer benefits, he obviously relished wielding the pink slip. After all, it made him not just rich but filthy rich.

The extent to which this factored into Romney's 39.3 percentage point win in New Hampshire yesterday is a open question. Nate Silver, the peerless New York Times number cruncher, had predicted that Romney would get 38.4 percent of the vote.

Although Romney now has back-to-back wins, his purported inevitability (something that I admit to having bought into) seems less certain with swift boaters Newt Gingrich and Rick Santorum, who fared poorly in New Hampshire as they split the hard right vote, nevertheless nipping at the heels of his $500 Armanis. Meanwhile, anti-Romney attack ads began airing in South Carolina after the polls closed in New Hampshire.

Methinks Ron Paul has peaked. Jon Huntsman? Probably. But remember that under new party rules, states cannot hold winner-take-all primaries before April, so he won't have a majority of delegates anytime soon and probably not after the Super Tuesday primaries on March 6.

* * * * *
What is beyond question is that it has been people like Romney who looted the economy during the Bush Era, plunging the U.S. into a dreadful recession, and continue to do so.

Charles Pierce, the hair-in-fire Esquire political blogger, is only slightly over the top when he writes that Romney "could have been functionally unemployed for his entire life and not known there was any other way to live. He no more knows the existential dread that people feel in this economy than he knows what a boot feels like when it s like when it steps on an ant."

Romney's efforts to brand himself a great friend of the middle class, which he did again last night in his victory speech, are beyond silly. And stupid because they further expose him to attacks that threaten to undermine his campaign. This is known on the street as painting yourself into a corner.

And this is one tight corner because Romney keeps blathering about creating 100,000 jobs but of course can't prove that. After all, the objective of Bain was to create wealth, not jobs.

The alternative is to be who he really is and the news media, even including the Wall Street Journal, a paper who never met a venture capitalist it didn't heart, finally is doing that job with relish. This includes a recent story that Bain would hide its profits in tax havens and not even pay the rate it was supposed to on the profits it made laying off workers.