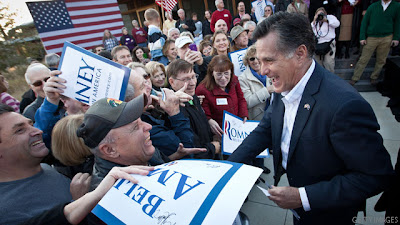 ROMNEY CAMPAIGNS IN SOUTH CAROLINA
Coming off of his razor-thin victory in the Iowa caucuses, tomorrow's New Hampshire primary is Mitt Romney's for the taking, but it is South Carolina's January 21 primary that will determine whether a man who a year ago appeared to be the inevitable Republican nominee can finally leave the competition in the dust.

This is because if Romney wins South Carolina, it is all over bar the shouting, which of course there will be a fair amount of. The former Massachusetts governor understands this, which explains why he has been campaigning as much in South Carolina as in New Hampshire.

There isn't much polling data out of South Carolina, but the results from two polls show Romney to be up by 10 points with Rick Santorum, who nearly stole a march on him in Iowa, to be closing fast. Newt Gingrich, who bombed in Iowa, is a distant third.

Should either Gingrich or Rick Perry or both bow to the inevitable and drop out, Santorum can be expected to give Romney a serious run because he would be pretty much the last hope for the party's hard right-wing base.

Looking back on the last year of often fractious campaigning as the Republican field has continued to narrow, I'm struck by how poorly Romney has done considering that he is a decent campaigner with a good staff and sizable war chest in the party's weakest presidential field in memory. This, of course, is a consequence of a Tea Party coup d'etat and an outsized number of kooks who have scared off more electable, which is to say moderate, potential candidates.

There are two reasons for this:

* Even if he stands the best chance of giving Barack Obama a fight, he does not inspire and has some pretty heavy duty baggage that the president and his surrogates already are exploiting.

* He is toxic to the GOP's ultra-conservative wing, which explains why candidates as weak as Gingrich and Perry remain in the race despite their poor poll numbers.

Romney also runs the risk of playing into the incumbent's hands.

Immediately after the president announced that he was defying congressional Republicans and would fill a high-level regulatory position while they were out of town, something that his Republican predecessor also did, Romney sent out a news release ripping the president for "Chicago-style politics at its worst."

This is exactly what the White House wanted to hear because it put Romney squarely on the side of those Republicans, a group with dreadful poll numbers because of its unrelenting opposition to anything that Obama wants, especially legislation that would help the middle class.

Romney's declaration that he is a champion of the working man drew jeers from David Axelrod, the president’s chief campaign strategist, who called it "Orwellian" in noting that Romney, the son of a wealthy business executive and prominent politician who became multimillionaire, would style himself the champion of "merit" against a man who reached the White House after being raised by a single mother.

* * * * *
The funnest part of Saturday night's Republican presidential debate was when the moderator noted that few of the candidates, most of whom have a Bush-Cheney Bomb 'Em Back to the Stone Age mentality, served in the military, and Paul piled on, calling Gingrich a "chickenhawk" who ducked service in Vietnam.

This brought the thin-skinned Gingrich to a boil. He barked that he wasn't eligible for the draft because he had a wife and kids but nevertheless did not feel the need to then proudly serve his country as he repeatedly beseeches today's youth to do in all of the wars he would start.

Romney did not fare as well at a debate yesterday, and at one point suggested that only rich people should run for office and bragged about his unsuccessful attempt to unseat Ted Kennedy: "I was happy he had to take a mortgage out on his house to ultimately defeat me."

"not one of the candidates, most of whom have a Bush-Cheney Bomb 'Em Back to the Stone Age mentality, served in the military"
Minor factual correction: Rick Perry and Ron Paul both served in the military. Gingrich's deferment was due to wife and children (although he probably also could not pass the physical). The 'pilonidal cyst' of fame was Rush Limbaugh.
Not that it makes any of them any better.

No problem. It's easy to mix up which hypocrite said or did what in this clown show. But as much as I enjoy mocking them, I believe in 'factually based' mocking. Leave the falsehoods to the other side.
(and, due to your background as a real journalist, I don't want to see you embarrassed.)

Anonymous said...
This comment has been removed by a blog administrator.
8:49 PM

It's going to be a VERY ugly campaign and my bet is that it's just getting started. Wait until AFTER the primaries. Oh boy. Much better than a football game to me. LOL

They're all so fake and full of it. Regardless of what you think of his politics and ideas, Ron Paul is the only one who doesn't come across as totally F.O.S. (that includes BOTH sides)