Will This Be The Year That The GOP Has To Agree To Tax Hikes For The Rich? 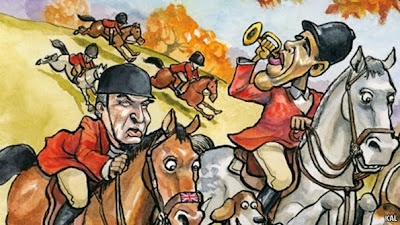 Despite having agreed -- cowardly so, in my view -- to continue Bush Era tax cuts that disproportionately favor the wealthy, it's likely that a component of President Obama's re-election platform will be a call to level the playing field through the so-called Buffet Rule, which would insure that no household making more than $1 million a year pays a lower tax rate than middle class families do.

Warren Buffet likes to point out that despite being a billionaire, he pays a lower tax rate as his secretary, which effectively undercuts the Republican mantra that asking the rich to pay more is class warfare.

But there are reasons for doing so beyond the simplistic argument that higher tax rates for the wealthy are justified because of the finance industry's role in crashing the economy. Mine is simple: It is time for the wealthy to pay tribute to a society that made them rich.

That bastion of capitalism, The Economist, which endlessly campaigns for smaller government and against higher taxation to pay for an unsustainable welfare state, recently listed three other reasons why the wealthy should pay higher taxes:

* Deficits should not be closed by spending cuts alone and tax increases are necessary to bear some of the burden.

* Spending cuts fall disproportionately on the less well-off, and even before the Bush Recession, median incomes were stagnating.

* The rich can pay a larger share not by increasing marginal tax rates, but by making the tax code more efficient.

In any event, how to tax the rich is tricky because most wealthy people respond quickly to tax increases by shifting their income into less-taxed forms such as capital gains, they work less, take fewer entrepreneurial risks and even leave the country for a tax haven. This means any form of a tax increase for the 1 percenters would have to take that into account.

The U.S. relies far more than other countries on income taxes but then undercuts that by a dizzying array of deductions. Some economists estimate that getting rid of deductions would raise as much as $1 trillion a year, and the rich would ante up most of that. There would be an added benefit as well: Getting rid of all the tax lawyers.

As it is, Obama has called for raising the U.S.'s top income tax rate from 35 percent to 39.6 percent, which doesn't amount to much if you're wealthy. Compare that to calls in Great Britain to raise its top rate to 50 percent.

Obama will not be able to succeed on any front without some cooperation from Republicans, and 2012 may well be the year that a party that unashamedly coddles the rich at the expense of everyone else will have to back off or face repeated attacks from a newly populist president and a public that is sick and tired of carrying a disproportionate share of the burden.

We can cross our fingers and pray.