A President With The Wind At His Back 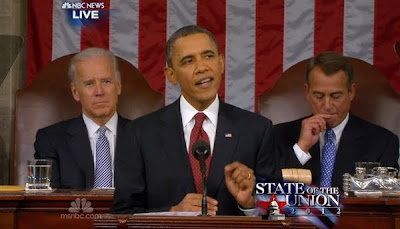 For the first time in his presidency, Barack Obama was able to deliver a State of the Union address last night with the economic and political winds at his back as the lingering aftershocks of the recession ebb and Republican infighting diminishes the party's chances of taking back the White House.

Obama's approval ratings are identical to those of the Great Conservative God, Ronald Reagan, at the same point in his first term and are rising, while the Tea Party militancy that has infected the core of the Republican Party has driven public support for Congress and Republicans in particular to record lows.

Absent the effects of a worsening economic crisis in Europe, it is the domestic economy and not Mitt Romney or Newt Gingrich, let alone John Boehner and his hapless Housemates, that will be Obama's chief adversary in the run-up to the November election. The president hammered hard on a populist message, specifically the income inequality that it at the heart of the long-term American economic malaise and where coddle-the-rich Republicans are the most vulnerable.

The soaring language of Obama's State of the Union speeches was absent as he repeatedly presented himself during the address long on tactics as a champion for middle-class families struggling to get by and declared that "we've come too far to turn back now."

Summoning the power of incumbency, the president sprinkled his frequently sharp-elbowed remarks with anecdotes and shout-outs to key cities in election battlegrounds and hit back against GOP attacks on an array of foreign and domestic policy areas while taking credit for saving the domestic auto industry and taking the first steps toward health-care reform.

He also riffed on tax reform, including reductions in corporate rates; more spending and accountability on education and infrastructure investment; and streamlining of the regulatory environment, as well as a number of small-ball, feel-good initiatives that won't cost taxpayers and arm and a leg.

The infrastructure investment is particularly noteworthy.

The president would use half of the savings from winding down the wars in Iraq and Afghanistan for public-works projects could put hundreds of thousands of people back to work, although Republicans, who are allergic to anything that would create jobs, are sure to insist that the money be used for deficit reduction.

A discordant note: Obama declared that he would not allow Wall Street "to go back to the days when [it] was allowed to play by its own set of rules," a rather hollow promise considering that most of his economic team are Wall Street insiders and there have been few crackdowns on miscreant financial institutions on his watch.

The timing of the speech could not be worse for the struggling Romney, and although the president did not mention Romney by name, in some respects the speech was a point-by-point refutation of where the one-time front runner stands on key issues.


The president emphasized his support for the "Buffett rule," named for the billionaire investor who has criticized a tax system that allows him and other investors to pay a lower rate than their staffs. The rule would require people making more than $1 million a year to pay at least the same tax rates as middle-class Americans, which can be close to 30 percent. Buffett has said he paid an effective 17.4 percent rate last year.

Buffett’s secretary was sitting in the gallery, while voters learned earlier Tuesday that Romney, too, is a symbol of what the White House is portraying as a major inequity. In 2010, he paid an effective rate of 13.9 percent on $21.7 million in income, most of it from investments, some of them at tax-free offshore sites.

"Now, you can call this class warfare all you want," Obama said. "But asking a billionaire to pay at least as much as his secretary in taxes? Most Americans would call that common sense."

Class warfare is exactly what Republicans are calling it. House Speaker Boehner, who sat behind the president during the speech along with Vice President Biden, suggested earlier in the day that the president's politics of "division and envy" are "almost un-American." Indiana Governor Mitch Daniels, who delivered the post-speech Republican rebuttal, said that "no feature of the Obama presidency has been sadder than its constant efforts to divide us, to curry favor with some Americans by castigating others."

Meanwhile, a new Washington Post-ABC News poll found independent voters quickly souring on Romney, whose strength with that group not long ago made him the opponent that many Democrats feared most, while overnight polls and a focus group with swing voters found that the president's populist pitch went over well.

Adding to the notion that the State of the Union address was, in effect, a campaign speech, Obama departed this morning on a three-day swing to five competitive states — Iowa, Arizona, Nevada, Colorado and Michigan — where he will turn up the heat on Republicans.

* * * * *
A little more than two hours before delivering his address, Obama learned that Navy SEALs had conducted a successful helicopter rescue mission in Somalia to free a U.S. citizen and her Danish colleague, who had been taken hostage by pirates three months earlier. The SEALs were from the same commando unit that killed Osama bin Laden.

Microphones in the House chamber picked up Obama saying "Good job!", congratulating Defense Secretary Leon Panetta and Joint Chiefs of Staff Chairman Martin Dempsey as he greeted them in the audience. But the administration did not explain the remark because the special-forces operators were not yet safely on the ground.