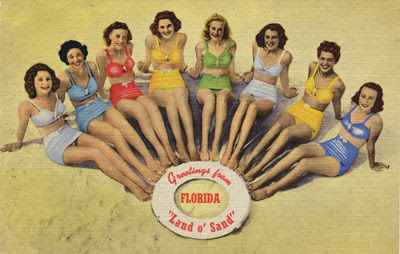 With five days to go before the Florida presidential primary, public-opinion polls in the Sunshine State are sending a mixed message. But one thing is for sure, a primary that once appeared to be a cakewalk for Mitt Romney may well turn out to be pivotal for the hapless candidate.

An averaging of the polls on Wednesday revealed a 4 percentage point lead for Gingrich. With a plus or minus 3 percent error margin, that is not much of a lead. A new poll out today puts Romney ahead by 7 percentage points, and there are indications that Gingrich might have hit a ceiling in support. As if it matters, Rick Santorum is a distant third and Ron Paul even further back.

Nate Silver's FiveThirtyEight forecast model at The New York Times still projects Gingrich as the slight favorite, giving him a 2-point lead and a 60 percent chance of victory, a lead that has diminished considerably from two days ago when the model saw a potential double-digit win for him.

The Florida vote is pivotal because national polls also show likely voters trending toward Gingrich and that was happening before he wiped the floor with Romney in South Carolina.

While Gingrich must be smiling about those numbers, they mask others.

The latest Fox News national poll of registered Democratic, Republican and independent voters found that 56 percent of respondents had an unfavorable opinion of Gingrich, while only 27 percent viewed him favorably. Only three other presidential wannabes have had negatives like that since 2000: Pat Buchanan, Al Sharpton and Sarah Palin.

Meanwhile, the latest Washington Post-ABC News poll shows that independent voters are turning off to Romney and they would be more likely to vote -- if they vote at all -- for Obama if Gingrich defies gravity and becomes the nominee.

Debates seem be having an outsized influence this primary season and so the debate tonight in Jacksonville might be crucial for Romney, who has underperformed in the face of red-meat attacks from Gingrich and Santorum.

Unfortunately, the outcome may come down to which candidate can better exploit the other's dirty laundry.

In a gaffe of monumental proportions, Romney released his 2010 tax return and estimated 2011 return on the morning of President Obama's State of the Union speech, which gave the president a perfect opportunity to offer a point-by-point refutation of Romney while not mentioning him by name.

With the tax return story still dominating the news cycle, this gives Gingrich a built-in opportunity to go after Romney -- and he is doing so with relish over Romney's Swiss bank accounts and a newly-aired accusation that Romney profited handsomely from the epidemic of home foreclosures in Florida.

Romney will hit Gingrich hard on his ties to Freddic Mac and ethical lapses as speaker of the House. He is intimating that Nancy Pelosi, the former House speaker who was on the investigative committee that looked into Gingrich at the time, is holding back a secret dossier of damaging information that she would share if he becomes the nominee.

Given the overwhelming approval that Obama's speech has received, the Gingrich-Romney fisticuffs must be doubly satisfying for the White House. The Republicans brought this mess on themselves and only they can undo this mess themselves.

Unless, even at this relatively early date, it's already too late.

* * * * *
Meanwhile, conservative pundits and some of Gingrich's former House colleagues have turned on him with a panicked vengeance in labeling him, in effect, an anti-Reagan, Clintonian fraud:

* The Drudge Report ran a story today under the banner headline: "Insider: Gingrich repeatedly Insulted Reagan" that links to a devastating takedown by Elliott Abrams in the National Review, who wrote, among other things, that Gingrich had a long record of criticizing and undermining Reagan’s most transformative policies.

* Ann Coulter warned: "Re-elect Obama, Vote Newt!" and lambasted Gingrich for a "hotheaded arrogance is neither conservative nor attractive to voters."

* Tom DeLay, a top Gingrich deputy during the Republican revolution of the mid-1990s,said in a radio interview that "He’s not really a conservative. I mean, he'll tell you what you want to hear. He has an uncanny ability, sort of like Clinton, to feel your pain and know his audience and speak to his audience and fire them up. But when he was speaker, he was erratic, undisciplined."