Those Silly Republicans Were For Capitalism Before They Were Against It 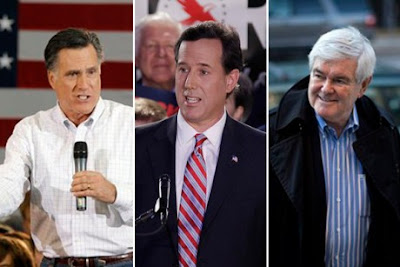 That grinding sound you hear are the tectonic plates of Republican presidential politics shifting. In what direction and how far they shift may determine whether Mitt Romney has a chance of beating Barack Obama in November. That is if he can survive brutal attacks from some of his opponents.

Although it was not noticeable, the shift began with the burst of Occupy Wall Street demonstrations, first in New York and then in many other cities, beginning in September. Republicans, including Tea Partiers, initially denounced the protests as class warfare and defined them as a clash between capitalism, which they endorsed, and socialism, which they of course believe is the path to purgatory on which Obama has set America.

If there was a discordant note in all of this, it was the support of the Tea Party for a system that is hard-wired to insure that the rich get richer and the middle class poorer, which is exactly what has been happening over the last two decades. But cracks soon began to appear in the Republican facade as more and more Americans said they supported the protests in principle even if they weren't going to leave the comfy confines of Main Street to camp out with a bunch of smelly hippies.

With Republican bigs sensing a shift in the prevailing winds, they began changing their tune. Attacks accusing the protesters as being "traitors" were muted and some Republicans, while not endorsing the Occupy movement, no longer spoke out against it.

Fast forward to December 6 when President Obama, with an impeccable sense of timing, stepped up to a podium in Osawatomie, Kansas, the town where Teddy Roosevelt had delivered his famous New Nationalism speech in 1910 decrying a Republican economic agenda that favored the rich at the expense of the middle class and poor. Obama delivered a virtually identical message in firing the opening salvo of a re-election campaign based on good old populism.

In presenting himself as the defender of working-class Americans and Republicans as defenders of a small elite, the so-called 1 percenters, Obama in effect rolled a grenade into the Republican presidential tent.

Effects of the explosion were immediate and have continued to reverberate through the early stages of the primary season as presidential wannabes found that their arguments that Obama was responsible for the recession and the loss of millions of jobs, something that many voters have not bought into, were being undercut by his message.

It is Mitt Romney, of course, who has been most vulnerable to that message because of his stewardship of Bain Capital, an equity firm that in the finest tradition of avaricious capitalism, looted company after company, in some cases intentionally bankrupting them and then furloughing workers by the thousands. Some were invited to reapply for jobs that paid less and offered fewer benefits.

One irony of this plate shifting is that Romney's chief nemeses are Newt Gingrich and Rick Santorum, who finished tied for a distant third in New Hampshire in splitting the hard right-wing vote, but have done quite well, thank you, feeding at the very trough where Romney has drunk long and hard. Gingrich is a millionaire while Santorum had nearly a million bucks in income last year without having a steady job.

Another irony is that Gingrich in particular is now spouting the semblance of an anti-capitalism line while joining his opponents in ritually denouncing Obama as being disdainful of individual enterprise.

While Gingrich is legendary for flip-flopping, it was rather startling to hear him ask New Hampshire voters if "capitalism [is] really about the ability of a handful of rich people to manipulate the lives of thousands of other people and walk off with the money? Or is that somehow a flawed system?"

Never mind that the kind of attacks Gingrich and Santorum are making would have been verboten a few years ago. Whether they will get any traction in South Carolina, where Gingrich’s surrogates have launched a multi-million dollar fusillade of television and print attack ads in the run-up to the January 21 primary, is another matter. This is because every time Gingrich goes after Romney he tramples on his own message, whatever it may be on a given day, and that is the last thing that a candidate verging on being an also-ran wants to do.

There is the possibility that the imbroglio of Bain Capital will peak early and Obama will have used up his most effective weapon. Which Romney had better pray happens because his responses to the attacks recall Herman Cain's serial bumblings and obfuscations over the sexual harassment allegations against him.

There also is a good chance that the economy will continue to improve, thereby undercutting his message.

In the meantime, and as I noted yesterday, Romney's efforts to brand himself a great friend of the middle class, which he again did last night in his victory speech, ridiculous. And stupid because he is unable to back up preposterous claims that he created 100,000 jobs while head honcho at Bain they further expose him to attacks.