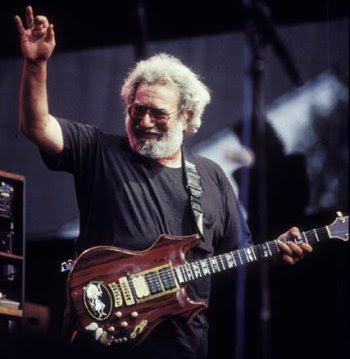 It all rolls into one/and nothing comes for free/There's nothing you can hold for very long/And when you hear that song/come crying like the wind/it seems like all this life/was just a dream . . .

Jerry Garcia did not seek out fame. A gentle soul who just wanted to play music, fame found him. And despite a long career as an extraordinary guitarist that brought him adulation, gold records and eventually wealth, happiness remained elusive and fame finally killed him. 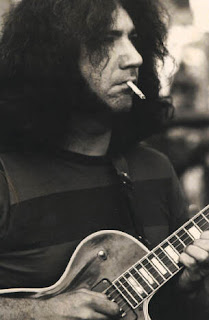 Don't get me wrong. Garcia was of course the master of his own destiny. But in addition to being hard wired for musical virtuosity, he slid easily into drug addiction – notably cocaine and later heroin – a refuge from the intense pressures that came with being "Captain Trips," the de facto leader and spokesman for an improbable success story called the Grateful Dead. He was on and off of the hard stuff for much of his career and mostly on during the years before his weakened heart and diabetes-riddled body packed in at a drug rehab center a few days short of his 54th birthday in 1995.

It may seem off putting that I remember the man Rolling Stone magazine named the 13th all-time greatest rock guitarist for his demons, but I have often reflected on the lives that great musicians live away from the spotlight as what is left of my hair has turned to gray. This helps explain the ambivalence that I and some – if not many – other people with deep musical connections feel for Garcia and for the Dead. To riff on Goldilocks, this is because when they were good they were very, very good. And when they were bad they were horrid. 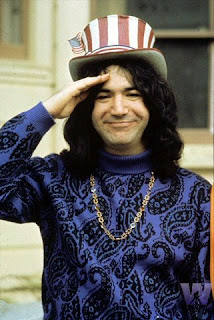 I say this from some experience: I saw Garcia play over 100 times with the Dead and various side bands. And while I did not know him, we did speak a few times and I know enough people who knew him well that I believe I have his measure.

Jerome John "Jerry" Garcia was born in on . Named for composer Jerome Kern, he grew up in a musical household. His father Jose was a professional musician and his mother Ruth, a nurse, played the piano.

Garcia may have been ranked 13th on the Rolling Stone list, but with apologies to Django Reinhardt, he was without peer when it came to being the best nine-fingered guitarist, a result of losing two-thirds of his right middle finger at age 4 while steadying a piece of firewood for his ax-wielding older brother, Tiff.

His father drowned while fly fishing with him the following year and he was raised by his mother, who began sending him to piano lessons at age 8 and gave him an accordion for his 15th 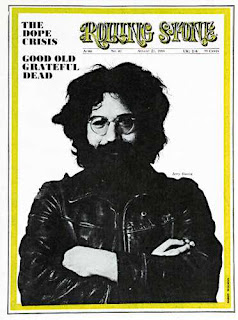 birthday. Garcia had wanted an electric guitar, and mom swapped the squeeze box for a cheap Danelectro, the first of the dozen or so models of Gibsons, Gibson Les Pauls, Fender Stratocasters and various Doug Irwin Customs that he would play before millions of people in , and over the next four decades.

Garcia’s later teens were dominated by guitar playing, the kindling of a lifelong interest in the visual arts, and marijuana. He dropped out of high school in his junior year and did a brief stint in the Army, receiving a general discharge after two courts martial and eight AWOLs.

In the early 1960s, he was drawn to a house at in ’s Haight-Asbury district, the crucible for the Summer of Love, all things hippie and psychedelic music. There he met Robert Hunter, who was living in a car behind 710 and would go on to become the Dead’s lyricist, and Phil Lesh, a classically trained trombone player who would become the Dead’s bassist. Lesh wrote in his autobiography that in 1962 Garcia resembled 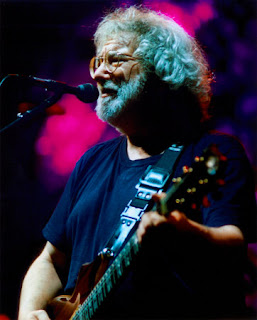 Lesh approached Garcia at a party at 710 and suggested that they record some songs in order to get radio play. They recorded "" and "The Long Black Veil," among other folk standards, and Garcia soon began playing and teaching acoustic guitar and banjo. Among his students was Bob Matthews, who introduced Garcia to Bob Weir, who would become the Dead’s rhythm guitarist.

Garcia played in several bluegrass and folk bands in the run-up to the formation of the Dead, including Mother McCree's Uptown Jug Champions, which included Ron "Pigpen" McKernan, who would become the Dead’s sometime lead signer, harmonica and keyboard player. He also began taking LSD, recalling in a book-length 1972 interview with Rolling Stone founder Jann Wenner and author Charles Reich that:

"Well, it changed everything . . . the effect was that it freed me because I suddenly 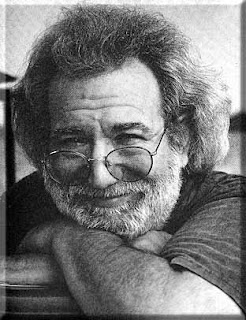 realized that my little attempt at having a straight life and doing that was really a fiction and just wasn't going to work out. Luckily I wasn't far enough into it for it to be shattering or anything; it was like a realization that just made me feel immensely relieved."

In 1965, Mother McCree's morphed into the Warlocks with the addition of Lesh on bass guitar and Bill Kreutzmann on percussion (who was joined later by percussionist Mickey Hart), but there was another band gigging around the Bay Area of the same name.

There are various versions of how the Dead came up with their name, but my favorite and possibly apocryphal version is that Garcia, sitting in the front room at 710 Asbury, randomly opened an Oxford English Dictionary and put his finger on the entry Grateful Dead, "a dead person, or his angel, showing gratitude to someone who, as an act of charity, arranged their burial." 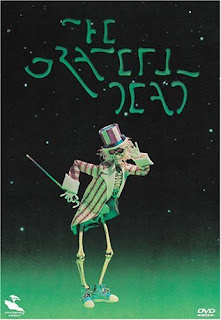 That being touring endlessly with the Dead from 1965 to 1995 – an extraordinary total of 2,314 shows – when Garcia didn't have health or drug problems, as well as creating a rich catalog of songs, most of which he collaborated with lyricist Hunter on, and of course his guitar playing.

Garcia matured quickly as a guitarist and, in my view, peaked creatively in the late 1970s. He was facile in several musical genres – country, bluegrass, folk, rock, R&B, soul, gospel, reggae and jazz – but in the end always was his own master when it came to music, if not life, and his sound was distinctively his own.

Like Jimi Hendrix and Duane Allman, to cite the No. 1 and 2 greatest guitarists on the Rolling Stones list, experienced listeners know that they are hearing Garcia from practically the first note. Insofar as live performances are concerned, I usually can zero in to within a year or two of when a recording was made, sometimes the very night on which it was made, if it is pre-1980, or about the time I concluded that the Dead had lost much of their punch and creative energy along with and perhaps primarily because of Garcia. 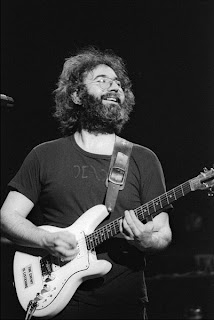 Garcia was best known, and deservedly so, for his extended guitar improvisations, and while it is not true that he and the Dead never played a song the same way twice, they came awfully close.

In a Guitar magazine interview in 1985, he said that

"It keeps on changing. I still basically revolve around the melody and the way it’s broken up into phrases as I perceive them. With most solos, I tend to play something that phrases the way the melody does; my phrases may be more dense or have different value, but they’ll occur in the same places in the song."

If Garcia had a musical signature, it was his use of rhythmic triplets in which three beats are played in the space of two, but it was his masterful interplay with the Dead’s other members – at least on the best nights – that I will cherish as being among the most memorable musical experiences in a lifetime full of them.

There was no Garcia or Grateful Dead "philosophy" per se, and unlike the Jefferson Airplane and 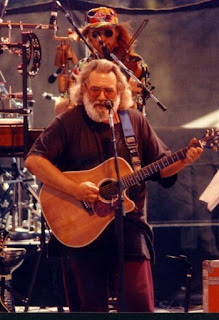 Quicksilver Messenger Service, the other sides of the original San Francisco psychedelic music triad, he and the Dead were doggedly apolitical while generous to a fault with their earnings. They never hesitated to embrace charitable causes, did many fundraising shows and founded the Rex Foundation, which gives grant money to grassroots organizations the world over.

But as longtime Dead publicist Dennis McNally wrote in "A Long Strange Trip: The Inside History of the Grateful Dead," if they did have a philosophy, it would be psychiatrist Carl Jung’s concept of synchronicity.

McNally quotes Garcia as saying that

"We know from out own experience that enough things happen that aren’t the result of signals or planning or communication that we’re aware of, but that are miraculous manifestations, that keep proving it out, that there’s no way to deny it. We're just involved in something that has a very high incidence of synchronicity. You know, the Jungian idea of synchronicity? Well, shit, that's day-to-day reality for us. 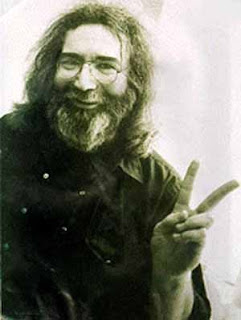 "There's a large element of what we do that we have no control over. We have to beg off from what's happening – it isn't us that’s doing it, we’re only like the tools through which it’s happening. And it's okay. We have faith . . . Our music is never counting. For us the One is always Now. In time – whether it’s 7/4 time, 4/4 time, or whatever – we’re always coming back to the One."

Jerry Garcia’s candid remark that his "little attempt at having a straight life" as a young man was a fiction is revealing, as well as somewhat sad, because in the end bad habits that begat those epic battles with his demons sapped his creative vitality and took him from us much too soon. I say somewhat sad because truth be known, it is difficult to imagine a man whose life was one long strange trip being a bank president by day and taking me on such fantastic musical odysseys by night.

In the end, Garcia was the ultimate tour guide: He took me to exraordinary places but he always brought me back and set me down gently.

I particulary like the work he did with David Grisman, what they called Dawg Music.