The Summer of Love Reconsidered 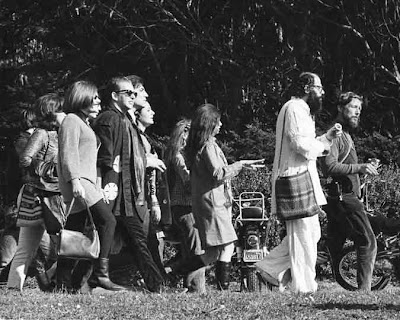 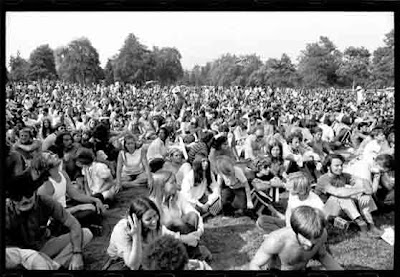 is still suffering the horrible consequences of hippies who thought utopia could be found in joints and intentional disconnect.

It has been 40 years since the Summer of Love and those unlovable right-wingnut Republicans, led by their knuckle-dragging shoot 'em up poster boy, are waging class warfare anew against a favorite target. But is it possible that Ted Nugent has a point?

The Summer of Love actually began in January 1967 with the first Human Be-In in in and ended with the Death of the Hippie March in Haight Ashbury in October of that year. In between, thousands of high school and college kids drawn by media and first-hand accounts of the birth of the so-called hippie counterculture poured into the city.

Yes, I was part of the horde, although I spent most of my brief stay across the bay in , which also was awash in free dope, free love, free music and free lentil loaf.

"Turned off by the work ethic and productive American Dream values of their parents, hippies instead opted for a cowardly, irresponsible lifestyle of random sex, life-destroying drugs and mostly soulless rock music that flourished in . . . . The bodies of chemical-infested, brain-dead liberal deniers continue to stack up like cordwood. . . . The 1960s, a generation that wanted to hold hands, give peace a chance, smoke dope and change the world, changed it all right: for the worse."

Wring the hyperbole from Nugent's purple prose and he makes a very serious allegation: Those wild and crazy Sixties ushered in an era of moral decay that my generation has infected with from family room to factory floor.

If you think you know where I come down on this, you might be surprised that I don’t entirely disagree with Nugent, although the kernels of truth in what he says are obscured by his rank blunderbussing.

One kernel of truth is that the Summer of Love and flowering of the counterculture was open season for people who were more adept at changing hash pipe screens than their kids' diapers, let alone the world. This is where I do have a real problem. Driving a VW Beetle until it runs out of oil and blows up is one thing, but screwing up your kids' lives is another. And unforgivable even under the most lax standards of the time.

I have known a few of these types, although there is something about human nature that has empowered most of their kids to shun their parents’ behavior and grow up to lead comparatively normal lives.

Having dealt with the first kernel, let’s move on to the big nut:

The vast majority of people who rode the counterculture wave have turned out just fine and arguably better than the right-wing crackpots who are hung up about anyone who doesn't worship their God, play by their rules and doesn't share their recidivistic intellectual constipation.

Many of us have indeed tried to make the world a better place and succeeded in myriad small ways. This is because the experience made us more curious, more compassionate, more humble and . . . well, more human.

My circle of friends from that era – the folks who went on the road with me to like really far out Grateful Dead concerts, man -- are typical.

One became a pediatrician, one a dentist, one a public defender, one a nurse, one a gourmet chef, one a building contractor and two school teachers. All have given back more than they have taken, and all have voted in every election, given to charities, done volunteer work, tried hard to be good parents and helped care for their parents when they became infirm. Yes, one of us died of acute alcoholism, but I believe that he was hard wired for that disease and would have suffered the same fate no matter when he had come of age.

There is one more kernel of truth:

Although Nugent doesn’t address it head on, I suspect that many of the graduates of the counterculture have been remiss in not being candid about their own experiences with their offspring when the time comes to talk about stuff like sexuality and drugs and alcohol.

I come down somewhere in between on that account, although I have been unrelenting in passing on a message that I took to heart in the Sixties: Listen to your elders. Listen to public officials and politicians. But decide what is true and right for you.

Teaching your kids to hate, that's what evil. Either side can do it, but it is the province of the religous right.

Teddy Nugent likes guns. It's his perogative. Did he teach his kids to love them too, or does he let them just laugh at him?

To use an over-inflated douche-bag like Ted Nugent, (whose music I love) to determine if what we did way back when was correct is ridiculous. The point is you and many other well intentioned (or not), tried to do something. Getting "loud" on the internet doesn't count. Writing anquished posts about those bad neocons, etc. doesn't do squat. For the crimes committed by this administration, we should all be getting on buses and go to Washington and risk getting our asses kicked, something, anything! Ted Nugent is a marginal man, who thrives on negative attention, much like Ann Coulter, and like bad children, should be ignored.

I agree with you in agreeing with Nugent to a small degree. The original hippie evolution was a magical, surreal era. Unfortunately, it eventually lost its magic and what was left was just the drugs and street life. The music, which had been such an enormous part of the movement changed too. On a personal note, I was in San Jose in 1967 having graduated high school that year. Guess we were neighbors. I grew up in the bay area.
I did a series of 4 or 5 posts on the music of those years, even includes a short bit on Mario Savio who you must have heard of if you were in Berkeley. If you're interested, go to the January 2006 archive on my site and enjoy.
Thanks again for another good post.

Here's a website you may find useful. http://www.addicted.com is a site for friends, families, and those who suffer from various addictions.

Ted Nugent writes in the WSJ, "I flushed more dope and cocaine down backstage toilets than I care to remember. In utter frustration I was even forced to punch my way through violent dopers on occasion..."

I'm guessing this was between takes while Ted & the Amboy Dukes produced "Journey to the Center of the Mind." Album art here: http://static.rateyourmusic.com/album_images/28655.jpg

Tommy Chong served 9 months in the federal pen and lost more than $100,000 for a smaller collection than that.