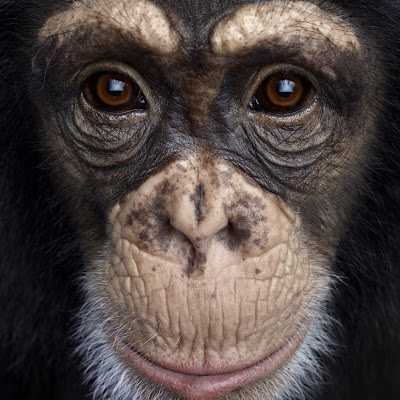 It should come as no surprise that chimpanzees are self-aware, seeing that they are our closest cousins even if we can be conspicuously unself-aware at times. But new research shows that chimps can anticipate the impact of their actions on the environment around them.

The researchers say the findings challenge assumptions about the boundary between humans and non-humans, and shed light on the evolutionary origins of consciousness.

Earlier research demonstrated the capacity of several species of primates, as well as dolphins, to recognize themselves in a mirror, which suggested a fairly sophisticated sense of self.

But even if tests such as these revealed a certain degree self-awareness, many questions remained as to the underlying cognitive process.

In the service of trying to answer that question, Takaaki Kaneko and Masaki Tomonaga, researchers at the Primate Research Institute in Kyoto, designed a series of three experiments to see if chimps to some extent "think" like humans when they perform certain tasks.

In the first experiment, three females initiated a video game by placing a finger on a touch-sensitive screen and then used a trackball similar to a computer mouse to move one of two cursors.

The movement of the second cursor, designed to distract or confuse the chimps, was a recording of gestures made earlier by the same animal and set in motion by the computer.

The "game" ended when the animal hit a target or after a certain lapse of time.

At this point, the chimp had to identify with her finger which of the two cursors he had been manipulating, and received a reward if she chose correctly. All three animals scored above 90 percent.

"This indicates that the chimpanzees were able to distinguish the cursor actions controlled by themselves from those caused by other factors, even when the physical properties of those actions were almost identical," the researchers said.

But it was still not clear whether the good performance was truly due to the ability to discern "self-agency," or to observing visual cues and clues, so the researchers devised another set of conditions.

This time they compared two tests. The first was the same as in the previous experiment.

In the second experiment, however, both cursors moved independently of efforts to control them, one a repeat of movements the chimp had generated in an earlier exercise, and the other a repeat of an "decoy" cursor. The trackball, in essence, was unplugged, and had no connection to the screen.

If the chimps performed well on the first test but poorly on the second, the scientists reasoned, it would suggest that they were not simply responding to visual properties but knew they were in charge.

The final experiment -- used only for the most talented of the chimps -- introduced a time delay between trackball and cursor, as if the two were out of sync, and a distortion in the direction the cursor moved on the screen.

All the results suggested that "chimpanzees and humans share fundamental cognitive processes underlying the sense of being an independent agent."

Posted by Shaun Mullen at 10:00 AM
Email ThisBlogThis!Share to TwitterShare to FacebookShare to Pinterest

How many humans, so tested, would make it past the "smash the screen and go get a beer" stage?