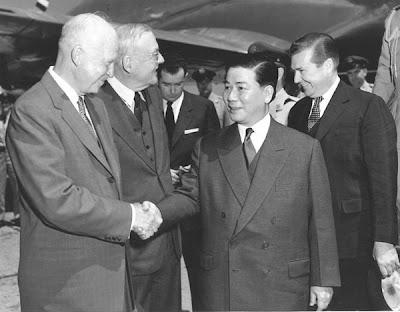 The death last month of Madame Nhu aka the Dragon Lady, who was a lightning rod for all that was wrong with the U.S.-supported South Vietnamese regime, hree weeks before the death of John F. Kennedy in November 1963, another assassination of a president occurred halfway around the world -- the CIA-backed murder of Ngo Dinh Diem of .

That assassination is a mere historic footnote, but it helped propel the U.S. into a decade-long quagmire that took 58,000 American lives and in some respects was a template for another failed war in Iraq. The similarities include an attempt to impose democracy on a society that is unprepared for it and divided along sectarian lines, as well as propping up a corrupt regime more focused on power mongering than national reconciliation.Kennedy was very much a free-thinking liberal, but he always put s interests first.

As a young congressman, Kennedy had been a lonely voice in condemning military aid to colonialist France in its fight against the Communist Viet Minh Army in what was then called .

Within weeks after the disaster, Kennedy acknowledged that pats on the back and America greenbacks weren't enough when he ordered 400 Special Forces troops to and another 100 advisers to help train up the South Vietnamese military, as well as instituting a clandestine war against the Viet Minh and Viet Cong guerrillas in both the South and North and neighboring .

Kennedy rejected Diem's calls for a major infusion of American troops and air support, but the number of Special Forces and advisers grew steadily, as did the clandestine campaign, and by 1963 there were 16,000 Americans in-country and U.S. deaths were climbing into the hundreds.By the summer of 1963, something had to give.

Led by the president's corrupt brother Nhu and sister-in-law, the flamboyant Madame Nhu, the Diem regime was waging open warfare against South Vietnam's Buddhist majority. They made mass arrests and closed schools, prompting demonstrations, including one during which a monk set himself on fire on a crowded Saigon street, a public relations disaster in the States and abroad not unlike the backlash provoked by images from Abu Ghraib prison in Iraq four decades later.

Diem and Nhu escaped through a secret tunnel under the palace and made their way to the Chinese district of Saigon where they were captured and killed under still murky circumstances.No federal law then or now criminalizes U.S. involvement in the assassination of a foreign official. While the involvement of the CIA in and White House approval of the plot against Diem may have been questionable, it was not illegal. Nor was his death the end of the s problems.

Based in part on an article by Peter Kross
in the October 2004 issue of Magazine.
Posted by Shaun Mullen at 12:10 AM
Email ThisBlogThis!Share to TwitterShare to FacebookShare to Pinterest

Anonymous said...
This comment has been removed by a blog administrator.
11:32 AM

muebles camobel said...
This comment has been removed by a blog administrator.
5:35 PM