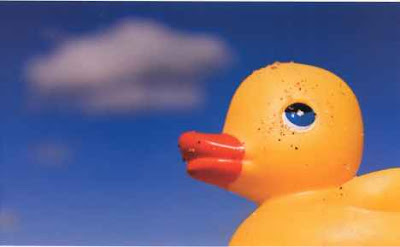 SECOND OFFICER: Hast seen the White Whale?
DONOVAN HAHN: Hast seen the Yellow Duck?
When a load of 28,800 rubber bath toys plummeted into the northern Pacific Ocean from a storm-tossed container ship in 1992, beachcombers and oceanographers were in rapture. The toys washed up on coastlines from Alaska to California to Massachusetts for years, some traveling west to east via the Arctic Ocean, a treasure trove for collectors and a terrific opportunity to study ocean currents for scientists.

For Donovan Hahn, a prize-winning editor and poet, it was an opportunity to set out on a series of seagoing adventures long on introspection, as well as laughs, that would culminate in one of the quirkiest but most informative books that I've ever read.

In fact, despite its run-on title, the recently published Moby Duck: The True Story of 28,800 Bath Toys Lost at Sea and of the Beachcombers, Oceanographers, Environmentalists, and Fools, Including the Author, Who Went on Search of Them, is an unalloyed joy.

The spill from the Seattle-bound Evergreen Ever Laurel container ship occurred on or about January 10, 1992 at 44.7 degrees N, 178.1 degrees E, south of the Aleutian Island in what oceanographers formally call the North Pacific Subtropical Convergence Zone. It is informally known as the Great North Pacific Garbage Patch because in reality it is a vast floating landfill full of debris, much of it degraded plastic.

Hurricane force winds and waves 36 feet high pitched the Ever Laurel from side to side. During one especially steep roll, two columns of containers stacked six high snapped loose from their lashings and tumbled overboard. One container included boxes of 28,000 plastic animals called Floatees produced in Chinese factories for the bathtubs of America -- 7,200 red beavers, 7,200 green frogs, 7,200 blue turtles and (drum roll, please) 7,200 yellow ducks.

Hahn's quest was initially philosophical ("I wanted to refresh my capacity for awe") as well as quixotic (“What misanthrope, what damp, drizzly November of a sourpuss, upon beholding a rubber duck afloat, does not feel a Crayola ray of sunshine brightening his gloomy heart?").

His travels took him to Alaska. Massachusetts, Hawaii, the Arctic, a Hong Kong toy fair and eventually to the mainland Chinese factory where the toys were manufactured, and he never strays far from the themes that Herman Melville riffs on in Moby-Dick, including memory, loss, childhood and fatherhood.

En route, we learn, among many other things, that the 50-mile long drift nets outlawed by international treaty and discarded at sea eventually agglomerate into huge balls, barnacles are especially fond of television screens and computer monitors, and an Alaska governor by the name of Palin vetoed a bill allocating state matching funds to remove debris from an otherwise lovely state park because the debris had washed in from Hawaii and Asia and had not been left there by her constituents.

Not surprisingly, the moral of Moby-Duck is that the lure of cheap plastic in a consumer culture run amok has caused extraordinary harm to our oceans and the creatures that inhabit them. Those cute rubber ducks are arch villains. Toxic at birth and in their afterlife, they become coated with organic pollutants like polyvinyl chloride that photodegrade into smaller pieces that can be fatally ingested by sea creatures.

worst book i've ever read in my entire life