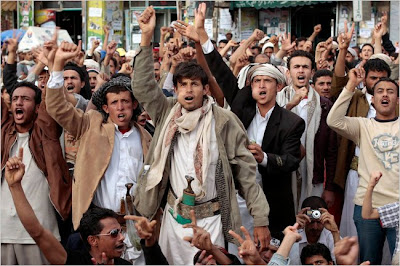 No matter what President Obama would say yesterday in a widely anticipated speech on the Middle East had to be tempered with certain expectation-lowering realities. Chief among them is that the pro-democracy fever sweeping the Arab world has much to do with Al-Jazeera and social media and little to do with Obama or Bush foreign policies, and that Israel, determined to be on the wrong side of history, will continue to be an obstacle to regional stability.

The speech came in the wake of a flurry of diplomatic activity, including largely symbolic sanctions against the regime of President Bashar al-Assad in Syria, which has brutally cracked down on protesters, and a $2 billion economic aid package for Egypt, which is feeling its way toward a more democratic society in the wake of President Hosni Mubarak's ouster in February.

If that were not enough, Israeli Prime Minister Benjamin Netanyahu arrives in Washington tomorrow with a plan to restart the peace process that offers a single possible concession -- a willingness to negotiate away some of the West Bank territory it illegally occupies. Meanwhile, an Israeli government committee approved the construction of more than 1,500 new settler homes in East Jerusalem just hours before Obama's address.

That address was ostensibly to Americans as he greases the foreign policy skids for his re-election campaign, it was Muslims around the world who were the most important audience, and he gave them little to chew on beyond debt forgiveness and expanded trade, notably with Egypt and Tunisia, which he cited as models for peaceful change.

Those initiatives are praiseworthy, but the sense of stalemate is palpable in much of the Middle East, which made it even more important that the president delineate a clear overall U.S. policy for the region in the post-Osama bin Laden world -- most importantly what he expects Israel and the Palestinians to do to jump start peace talks beyond stating the obvious -- that the status quo is not sustainable.

He did state, as I had hoped, that Israel's pre-1967 borders should be the starting point for negotiations over a Palestinian state, something that the Netanyahu government has fiercely opposed. He did not rap the knuckles of the recalcitrant Palestinian leadership for climbing back into bed with Hamas, which he probably could not do because he knows that unholy alliance is a prerequisite for many Palestinians for statehood. Nor did he call for the ouster of Assad, while making only passing reference to the deepening quagmire in Libya.

There is nothing to show for the administration's intense early efforts to broker an Israeli-Palestinian peace accord, while George Mitchell, the president's peace envoy, announced his resignation last week, his legendary patience having run out.

I continue to believe that a key to the long-term success of the Arab Spring rests with the only non-Arab country in the region.

This does not absolve the Palestinians of making nice, but Israel's reaction of shock and alarm over Mubarak's ouster was deeply disheartening, although not surprising. After all, no other nation in the region has a peace treaty with Egypt and the Egyptian president had supported Israel's inhumane Gaza policy.

In fairness to Netanyahu, even if he wanted help speed Palestine statehood as a sop to the U.S. and Israel's neighbors, which he does not, elements of Israeli society even more hawkish than he is would bring down his government.

I would never equate Netanyahu with Assad. I would defend Israel's right to exist with my own blood. But it is long past time for the U.S. give Israel a dose of strong medicine. That would have spoken louder regarding the U.S.'s long-term intentions -- and that it is foursquare behind the Arab Spring no matter where it may try to blossom -- than any speechifying about the joys of democracy.

Click here for the text of the speech.
Photograph by Ahmed Jadallah/Reuters

Obama's views on the way to resolve this conflict is not new as it's a view that's been articulated by both former US and Israeli leadership. George W Bush did it and a former Israeli prime minister also said going back to the 67 boundaries will be the only reasonable way to jump start peace between those two nations.

It's just the resolve of conservatives to disagree with everything Obama does that is leading this dishonest and fake attacks on the president. This video illustrated my complete view on this issue http://newsparticipation.com/thoughts-on-the-obamanetanyahu-meeting/