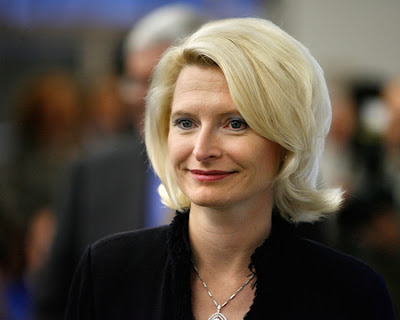 Five hundred thousand at Tiffany’s? There’s a simple explanation. The guy clearly buys his engagement rings in bulk.
~ STEVEN COLBERT
There is little pleasant going on in national politics these days, but the slow but steady self-destruction of Newt Gingrich is a joy to behold. As well as inevitable.

It was inevitable that his run for the presidential roses would be derailed not over policy issues but because he is so palpably phony and deceitful. The only question would be his choice of weapons.

Well, it turns out they they aren't dueling pistols and even a sword, but rather the incredible number of super-expensive baubles that he has bought third wife Callista on a revolving charge account at Tiffany & Com. said to range from $250,001 to $500,000.

Among the goodies that Callista has been seen wearing is a strand of diamonds that adorned her ibis-like neck last month at Washington debut of the couple's latest documentary movie. Tiffany lists them at $45,000. Then are are a $22,000 pair of diamond and gold starburst earrings, among other baubles.

Hey, you say, every spouse is entitled to a little bling. But Gingrich has preached the virtues of fiscal conservatism ad nauseam and has continued to do so at a time when many Americans are out of work and one and nine are on food stamps, a program that he and most Republicans want to cut back on.

Gingrich has worked hard to present himself as a family man after a six-year secret affair with Callista and two marriages that ended under . . . uh, difficult circumstances for the spouses, but again finds himself the butt of late-night comedians.

Incidentally, Tiffany's says that Gingrich has paid his debt in full. But not to society.
A TALE OF TWO JOHNS
As a prominent politician, you have to be really bad or really stupid or a combination of both to have the ethics police come down hard on your sorry ass. I'll leave it to you to decide whether John Ensign and John Edwards are one or both.

Ensign thought that his resignation from the Senate earlier this month would put an end to all the negative press about one of the more complicated scandals in recent Washington history:

The Senate Ethics Committee usually roles over in instances as blatant as this, but has now issued a scathing report that concludes there is "substantial and credible evidence" that the Nevada Republic broke federal laws.

Edwards is arguably in even more trouble.

The former Democratic golden boy has been green-lighted for prosecution by the Justice Department for violating campaign laws while trying to cover up his affair with Rielle Hunter, his long-time mistress and mother of his love child, Frances Quinn Hunter.

Edwards is in trouble for failing to report "gifts" of over $1 million to Hunter by two deep-pocketed campaign donors in an effort to hush up the affair.

BIG HUGS FOR PAUL RYAN
We'll chalk up to hyperbole Eric Cantor's widely reported remarks this week prior to the lashing that Paul Ryan's bread-and-water for the middle class plan took in that special election in upstate New York. Kind of like standing at the bedside of a terminally ill friend with tubes up his nose and only days to live and telling him that he looks marvelous.

Alas for Ryan, there was a second (symbolic) referendum on his plan in the Senate last night and another marvelous opportunity for Democrats to hang Republicans out to dry for their ideological humbuggery.

Like I said, the vote (57-40) was symbolic, but it's a safe bet that these Republicans and Republicans in general will be reminded over and over next year that their biggest criticism of the ObamaCare plan was that it cut Medicare. While that was inaccurate, it was an effective message at the time but one that has now boomeranged on them with a vengeance.

Why would Republicans continue to support gutting Medicare -- and other social services, as well -- in the face of deep public opposition? Well, we know it's not principle. Perhaps it's stupidity. Or more likely still, cowardice -- fear to stand up to one's own party even when you know its wrong.

BLACKMAILING DISASTER VICTIMS
Speaking of Cantor, the House majority leader has announced that while Republicans would like to help victims of the tornado disaster in Joplin, Missouri, no disaster relief would be forthcoming until a ransom is paid in the form of off-setting spending cuts.

Need further evidence that the GOP have become the Kings of Mean? When Tom Del=Lay held Cantor's job there never was any question that disaster relief would be immediate and without strings attached.

That by today's standard makes DeLay a moderate.

Hey, considering the Newt's previous track record with wives, it's not surprising he has to shell out for some serious rocks to keep this one on tap. Most likely she knows she too will be humiliatingly dumped at some point, and she's milking him for what she can, while she can.

So that's what the morality-mongers have been spattering all over the political landscape.

Thank goodness we didn't nominate Edwards in 2008. Just imagine how the Republicans would be milking it if this crap were hitting the fan about a sitting Democratic President.