A Bittersweet Moment At Ground Zero 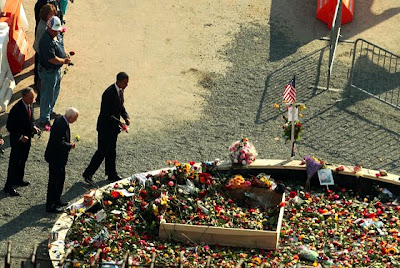 (REPOSTED FROM YESTERDAY)
While the 9/11 attacks should never been used for political ends, the Republicans have shamelessly done just that. Over and over and over.

This took some chutzpah because the attacks might have not happened in the first place if George Bush didn't have his head where the sun didn't shine, Dick Cheney, who was the de facto national security adviser, didn't ignore warnings that Al Qaeda was preparing to launch attacks on the homeland, and Condi Rice, who was the national security adviser, wasn't still fighting the Cold War.

Anyhow, the Bush administration seized on the attacks to ram through, or to put in place unilaterally, a series of draconian measures that it said would make us safer. None did, of course, and anyone who opposed them was termed unpatriotic. Even if he wore an American flag lapel pin.

And so we come to the bittersweet moment today when President Obama, whom Republicans have repeatedly excoriated for being weak on defense, laid a wreath at a memorial to the nearly 3,000 victims of the World Trade Center attacks. He later met privately with family members and the first responders that Republicans wanted to deny extended medical benefits until being shamed into doing so.

In a classy move, Obama did not give a speech although the ceremony came four days after the death of the man who ordered the 9/11 attacks, a cathartic moment that united Americans to be sure and a huge opportunity to make political hay.

In another classy move, the president had asked Bush to join him at the ceremony. In an equally classy response, the former president declined, believing that the moment belonged to Obama and the families. Which it did.

A coda, perhaps, to this post from a commenter at Andrew Sullivan’s Daily Dish:

“I am a World Trade Center survivor. I was on the 62nd floor of Tower One when the first plane struck and I was in the police command center in WTC 5 when WTC 2 collapsed on top of us. I am also a Catholic.

“When I turned away from the Mets-Phillies game Sunday night to watch the President ‘announce’ the news that everyone already seemed to know, I had no mixed emotions.

“That son a bitch killed my friends, colleagues, fellow New Yorkers, fellow Americans, fellow human beings. Worse still, he inspired thousands, if not more, to take up a blind nihilism as their credo, ostensibly in the name of Allah, ‘the merciful, the compassionate’. All the pain he has brought to this world has not been reckoned and may not be reckoned in our lifetimes.

“I sat on my couch Sunday night and poured a large glass of Irish whiskey and toasted the death of the man who had tried to kill me. ‘Fuck you,’ I said out loud.

“Then I went upstairs and looked in on my three sleeping children – my oldest born in 2002 – and I kissed them all. Then I settled in next to my wife – my beautiful wife, who will be married to me ten years tomorrow, and who is carrying our fourth child. She for many long hours thought her husband of five months was crushed to death in the towers. I put my hand upon her belly and I closed my eyes and I prayed that Osama bin Laden would know the fullness of Christ’s mercy.”