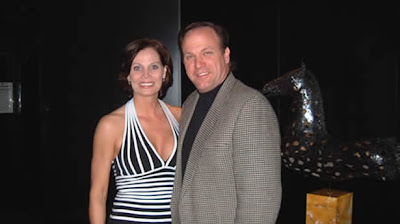 These smiling folks are Kathy and Bill Johnson.

Kathy is freaked out because she learned over the weekend that Bill, who as a Christian conservative had campaigned against same sex marriage, has donated sperm to several lesbian women.

The New Zealand Herald reported that while volunteering for earthquake recovery in Christchurch, Bill had used the online pseudonym "chchbill" to find women who wanted to have babies.

Johnson had been in communication with as many as nine lesbians who wanted to have children, the newspaper said. Three are already pregnant and three others may have accepted sperm from him.

The newspaper said that the fertility medicine community was concerned because guidelines suggest that no man should donate sperm to more than three women to prevent accidental incest.

One of the pregnant lesbian women explained that Johnson had only told her and her partner about donating to one other woman.

"He was in a hurry," she said of their initial meeting in a public place. "We were looking at December. He said 'If you want it done, we’ll do it now.' "

The couple said Johnson was wearing no wedding ring, and told them that his current relationship status “was not an issue.”

Johnson claimed that his wife knew he wanted to become a donor, but when ask if she knew he had gone through with the plan, he said, "She does now."

"I am married to the most beautiful woman in the world," he explained. "When I married her I knew we couldn’t have any more children. Kathy had a hysterectomy 10 years ago."

For her part, Kathy reacted with surprise.

"This is a really, really difficult time for our family," the former Mrs. Alabama told the Alabama Press-Register. "I’m still in disbelief and very hurt, and our family has a lot of healing to do."