The Failure Of Boehner's Leadership 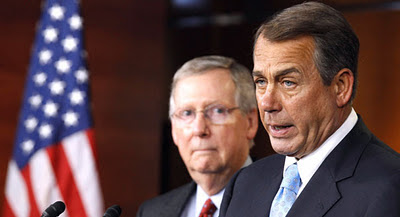 The routine is now familiar: Senate Republicans are in rare agreement with their Democratic colleagues and the GOP’s House leadership is poised to do likewise, but then reverses field, prompting the party’s Senate leadership to renege on its commitment.

And so in less than 24 hours, House Speaker John Boehner, having said he approved of the short-term, bipartisan Senate measure to extend a payroll tax break and unemployment insurance, turned tail and said his colleagues (read the Tea Party) opposed the two-month extension, setting the stage for yet another bitter Capitol Hill showdown over Boehner’s preference to extend the tax break and unemployment insurance for a full year.

That had been the Democrats’ original intention, but it would have been paid for by increasing taxes on 1 percenters and closing tax loopholes, something that Republicans of course would not support.

And then there was a twist that Machiavelli would have approved of as the Senate adjourned and representatives chaffed at the bit to do the same.

Under fire from GOP senators, House Republicans prepared to vote today against the Senate measure, demanding that the Senate reopen negotiations over the benefits.

Democrats, however, understand that because of Boehner’s ineptness, they have (again) stolen a march on him and are firm that they will not return to Washington until the House passes the short-term bill, which Republican Minority Leader Mitch McConnell negotiated and voted for, along with 38 other Republican senators.

Rather than have a straight up-or-down vote today, Boehner will implement a procedural maneuver in which his caucus will “reject” the Senate bill while requesting to go to conference with senators in a single measure, protecting House members from having to actually vote against extending a payroll tax cut.

Many voters will know better than to fall for this flapdoodle, as well as the reality that if Congress cannot agree to an extension, a year-end tax increase would kick in, something that economists have warned could set back a fragile economic recovery.

Boehner had initially tried to persuade his colleagues that the two-month extension was good for the GOP because it contained a provision that would speed the decision process for construction of an oil pipeline from Canada to the Gulf Coast known as Keystone XL. President Obama has threatened to veto that provision.