That the true story of the 2005 massacre of 20 Iraqi civilians, including an elderly man in a wheelchair and women and children, has finally come out because an Iraqi was using transcripts of secret interviews with the Marines involved to cook dinner is a fitting coda to a nearly nine-year war that officially ended today.

The events in the town of Haditha in Anbar Province were a horrific aberration, but 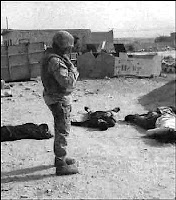 they are described in dehumanized and almost blasé terms by commanders in the province as, you know, typical of the chaos of Iraq.

Colonel Thomas Cariker, in one of the many lies told in the interviews, claimed the deaths were caused by "grenade attacks on a checkpoint and, you know, collateral with civilians."

Iraqi civilians are being killed all the time, explained Major General Steve Johnson, describing the deaths as "a cost of doing business."

True enough, but the initial response to the killings was to cover them up. When Time magazine, among other media outlets, published accounts of what really happened, the Marine Corps reluctantly charged eight men. One Marine was acquitted and charges eventually were dropped against six others on the grounds of conflicting testimony. The reality is that so many officers and enlisted men perjured themselves that it was impossible for Naval Criminal Investigative Service officers to make the charges stick. Meanwhile, one Marine is scheduled to go to trial early next year.

It is instructive to put the Haditha Massacre in the larger context of the war.

The massacre occurred on November 19, 2005 when Marines from 3/1 Kilo Company, 3rd Battalion, 1st Marines opened fire on the civilians not because they 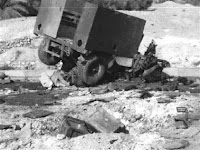 had been fired on but in retribution for the improvised explosive device attack (photo, right) on a Marine convoy by insurgents that killed Lance Corporal Miguel Terrazas and wounded two others, one severely when he was thrown from a Humvee and trapped under a rear tire.

The trial of Saddam Hussein had just gotten underway in Baghdad and the Al Qaeda insurgency led by Sunnis disenfranchised by Nouri al-Maliki’s Shiite government in Baghdad was becoming more powerful and was killing and maiming GIs throughout Anbar. These attacks were among the first stirrings of a civil war provoked by the U.S. occupation that was to fully erupt the following February when the Shiite Golden Mosque in Samarra was destroyed in a Sunni bomb attack. Some 871 Americans were to die before 2005 was over, the third highest yearly death toll of the war.

The 400 pages of secret interrogations were supposed to have been destroyed as the last American troops prepared to stand down, but were found by New York Times reporter Michael S. Schmidt along with reams of other classified documents, including military maps showing helicopter routes and radar capabilities, at a junkyard outside Baghdad as an attendant was using them as fuel to cook a dinner of smoked carp.

While the Marines and their commanders repeatedly perjured themselves, their

accounts also reveal the extraordinary strains on ground troops in Anbar and their often painful encounters with a population they did not understand and in many cases made no effort to try to understand as the rules of engagement, dictated by the White House as its rationalization for the war kept changing, themselves kept changing.

Some Marines testified that they felt they were under attack constantly and to use force first and ask questions later.

"When a car doesn’t stop, it crosses the trigger line, Marines engage and, yes, sir, there are people inside the car that are killed that have nothing to do with it," said Sergeant Major Edward T. Sax, the battalion’s senior noncommissioned officer.

Sax testified he would ask the Marines responsible if they had known there had been children in the car. When they said no, he said he would tell them they were not at fault.

Haditha became a defining moment of the war. It sealed an an enduring Iraqi distrust of the U.S. and a resentment that not one Marine has been convicted. While President Obama had been under pressure to make good on his 2008

campaign promise to withdraw U.S. troops from Iraq, it was that sense of American impunity that poisoned any chance of troops remaining without being subject to Iraqi laws and courts, a condition the White House and Pentagon have never accepted in any country where Americans are stationed.

Defense Secretary Leon Panetta's remarks today that the U.S. had secured democracy for Iraq as the American flag was lowered in a reinforced concrete courtyard at Baghdad’s airport surely rang hollow for many Iraqis.

The war has claimed 4,487 American lives, with another 32,226 Americans wounded in action, while as many as 100,000 Iraqis have been killed, millions wounded and millions more displaced.

While Saddam Hussein was a very bad man who happened to be taken out on the false pretense that he aided and abetted the 9/11 attacks, the man who succeeded him, Al-Maliki, is arguably just as bad as the pernicious influence of Iran grows and his secret police fan out across a U.S. "liberated" Iraq killing and kidnapping civilians who oppose his regime.