Unhappiness In Happy Valley One Month On: Still More Questions Than Answers 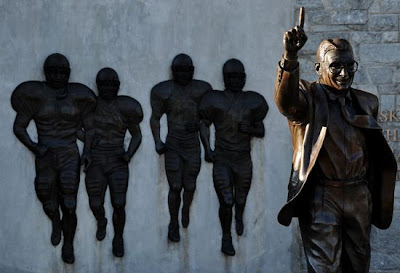 One month ago today, the tranquility of a college campus known in more tranquil times as Happy Valley was rocked to its core with the arrest of former Penn State defensive coordinator Jerry Sandusky on 40 counts of child molestation and the arrest of the athletic director and a vice president for perjury. After initially dragging its feet, the university's board of trustees fired legendary coach Joe Paterno and Graham Spanier, the longtime and highly regarded university president.

As is often the case with a scandal of this magnitude, the intervening month has been replete with new revelations, conflicting accounts of who did or did not do what, as well as the news that Paterno almost certainly was well aware that he could be in the cross hairs of civil suits for not dealing with the allegations when he first learned of them in 2002 and had moved to protect his most valuable asset by transferring his half ownership of the house he and his wife owned to her.

Meanwhile, the cover-up by the Penn State, now led by a young interim president, continues primarily because it is exempt from Pennsylvania's right-to-know laws, although it has tapped former FBI Director Louis Freeh to head its in-house investigation into the scandal. Freeh promises to leave no stone unturned, something that he regularly failed to do when he ran the federal law enforcement agency.

Penn State has been well known for its insularity. In his 16 years as president, Spanier and his administration circled the wagons whenever Penn State came under fire and only rarely released the kind of information that other public institutions would be required to make public, while Paterno bristled at efforts to discipline his players for violations of the university's student code of conduct.

* * * * *
But the question that I keep coming back is why there has to be an investigation. The answer, of course, is the failure of all of the actors from the president on down to not intervene more forcefully after Sandusky was outed in 2002.

That is notably true of Mike McQueary, who as a graduate assistant coach either did not (as he told a grand jury) or did (as he wrote in a leaked email to a friend) intervene when he came upon Sandusky sodomizing a 10-year-old boy in the football team's locker room showers and was sent to the complacent athletic directors office by a complacent Paterno when he screwed up the courage to kind of tell him what he had seen.

Despite calls to self-impose a bowl game ban this season as the University of Miami did after the NCAA began investigating its compliance practices, football is still the tail that wags the Nittany Lion. No surprise there.

A typical response to the call from diehard fans is that the players are not accused of wrongdoing, but several members of the coaching staff, including interim head coach Tom Bradley, were longtime associates of Sandusky and the perception grows that it was well known prior to 2002 that their former colleague, who retired unexpectedly and well before his time had come, was behaving strangely. It also is time to remove the legendary Joe Pa statue from outside Beaver Stadium.

There already have been economic consequences. About $80 million in Penn State gear -- hats, shirts and such -- is sold annually and the university is among the top 10 schools in retail sales. But industry analysts say sales are down about 40 percent compared to this time a year ago.

* * * * *
I had initially applauded Pennsylvania Governor Tom Corbett, who as then-attorney general had begun an investigation into Sandusky and then as governor was the catalyst for the board of trustees taking the actions that lead to the ouster of Paterno and Sandusky.

But a closer look at Corbett's role raises a couple of questions, the second of them very disturbing.

Why did it take so long for the investigation to wrap up? The response of a spokesman for the governor is that these things take time, but that runs counter to a cardinal rule of any child abuse investigation: If the perp is at large, he needs to be taken off the street.

Why did Corbett green light a $3 million taxpayer-fund grant to Sandusky's Second Mile charity a mere four months ago when the investigation was coming to a head? Corbett's response that he couldn't reveal the existence of the investigation is less than convincing, besides which past and present Second Mile board members, their families and businesses have donated more than $600,000 to Corbett campaigns since 2003.

In an extensive interview with The New York Times, he said he had never sexually abused any child, but confirmed details of some of the events that prosecutors have cited in charging him. He said that Paterno never spoke to him about any suspected misconduct, and said Second Mile never restricted his access to children until he became the subject of a criminal investigation in 2008.

Sandusky's pushback would be more credible if there were not so many detailed allegations against him, as well as McQeary's eyewitness account.

* * * * *
Finally, there are the alleged victims of Sandusky's serial abuses.

Victim One, as the grand jury report refers to him, has had to leave his high school in the middle of his senior year because of bullying.

Officials at Central Mountain High School in Clinton County, Pennsylvania weren't providing guidance for fellow students, who were reacting badly about Paterno's firing and blaming the 17-year-old, according to the the psychologist helping his family.

The name-calling and verbal threats were just too much, the psychologist said, but if anything good is coming out of the scandal is that other alleged victims have turned to each other for support fearing that others will out them.

Meanwhile, a ninth alleged victim has come forward. In a lawsuit, his lawyer asserts that Sandusky sexually abused the boy more than 100 times from 991 to 1996 and threatened to harm his family to keep him quiet.

The boy became the first plaintiff to file suit in the scandal but certainly won't be the last.