Virginia Tech Shooting: Gun Nuts Again Rush In To Politicize Yet Another Tragedy 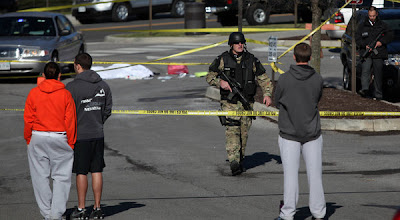 The gunshot-riddled body of a Virginia Tech police officer making a traffic stop was not even cold Thursday afternoon before the gun nut lobby rushed in to politicize the tragedy on the campus where a student shot and killed 32 people in 2007. A second person who may be the gunman was found dead in a parking lot about a quarter mile away.

First up to the plate was Students for Concealed Carry on Campus, a group that advocates allowing university students to pack heat. In a statement long on depravity and short on common sense, SCC said that:

"[It] sadly recognizes this incident proves yet again that nothing has changed at Virginia Tech. The college still entertain delusional beliefs that signs and stickers will prevent illegal weapons on campus, even as they protest paying fines for their failing to notify students of the initial murders preceding the worst shooting spree in history three (sic) years ago.

"This latest event shows evil people still exist in the world and all the laws in the world will not stop them from committing violent crime. Guns are not the solution to every problem, but they are a solution to some problems -- a solution completely ruled out by college campuses in Virginia and nationwide."

I have given up on there ever being a sensible national gun policy, let alone laws with teeth in the many states where it is easier to purchase guns than get a drivers license. The gun nut culture is far too powerful and the pernicious hold of the National Rifle Association on politicians is pretty much absolute. Let's be clear that I'm not talking about the weekend target shooter or the father who goes hunting with his kids each fall. I'm talking about people for whom guns is a religion and being able to pack heat everywhere -- whether in a tavern, church or shopping mall -- is seen as a God-given right.

Face it, America is a gun-sick country, a place where people can legally possess and in some cases carry weapons specifically designed to kill large numbers of people. Pennsylvania is Philadelphia and Pittsburgh with Alabama in between, as James Carville famously remarked, and the Dixie-like legislature is so in love with guns that they are easier to obtain in the Keystone State than fireworks. For good measure, the legislature refuses to allow Philadelphia to enact its own tough gun laws in an effort to end a slaughter that takes four times as many lives on a per capita basis than New York City, which has among the toughest gun laws in the nation.

Except for the usual crybabies such as gun violence victims, emergency room doctors, the occasional mayor of a liberal city, some sane Democrats, our socialist president and The New York Times editorial board, the NRA would have pretty much run roughshod from sea to shining sea in its jihad to arm America to the teeth.
Photo by Mike Gentry/The Roanoke Times via AP
Posted by Shaun Mullen at 12:10 AM
Email ThisBlogThis!Share to TwitterShare to FacebookShare to Pinterest

Having been travelling outside the US quite a bit recently, I am amazed at how many people assume that we Americans always have guns. I was told that the border guards in Canada expect Americans to show up with guns. Here in the islands, I am told that flying an American flag on your boat will help keep pirates away as they believe all Americans have guns on board. Quite a reputation to carry around. Of course when I was asked at the Canadian border crossing whether I had brought anything for personal protection, I thought the guard meant condoms, but he meant weapons. Silly me!

Anonymous said...
This comment has been removed by a blog administrator.
9:12 PM

Anonymous said...
This comment has been removed by a blog administrator.
9:28 PM

Anonymous said...
This comment has been removed by a blog administrator.
5:10 PM