Romney Made Hundreds Of Millions Firing Workers, Not Creating Jobs 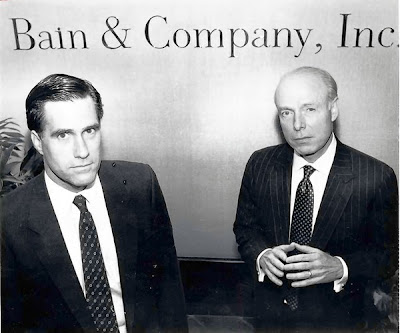 As economic flapdoodle goes, the notion that trickle down economics creates jobs and otherwise helps the middle class has been so thoroughly debunked that Republicans have rebranded it as “wealth redistribution.”

Still, the Republican message is pretty much the same less than a month before the all-important Iowa Republican caucuses and New Hampshire primary: Thou shalt not criticize the wealthy, let alone make them pay higher taxes, because they're creating jobs.

That message may resonate positively with deeply conservative GOP voters in those two states considering that the unemployment rate is 6.0 percent in Iowa and 5.3 percent in New Hampshire.

But voters in other states -- Nevada (13 percent unemployment) and Michigan (10.5 percent) to name but two -- won't be so easily fooled. They know that the wealthy are not creating jobs and the Greed Is Good mantra being huckstered by Mitt Romney, among other Republican wannabes, is not going to win their votes.

Romney is particularly vulnerable to criticism because as the CEO of Bain Capital, a private equity group, from 1984 to 1999, he and his investors got filthy rich while hurting ordinary workers by buying companies, jacking up their profits at the expense of workers and then reselling them.

A Los Angeles Times investigation found that Bain acquired more than 115 companies during Romney's tenure and its estimated returns were more than five times that of the Dow Jones Industrial Average during the same period.

But while Romney likes to boast that Bain's investment in a then-little-known office supply store called Staples has resulted in more than 90,000 jobs worldwide, under his leadership workers were fired, government subsidies were received that padded earnings, and companies often were flipped quickly for large profits. In some cases, Bain investors made money even when companies declared bankruptcy.

"I never thought of what I do for a living as job creation," Marc B. Walpow told the Times. The former managing partner at Bain, who worked closely with Romney for nine years before forming his own firm, was unequivocal: "The primary goal of private equity is to create wealth for your investors."

Four of these 10 companies declared bankruptcy, shedding thousands of jobs, yet Bain investors profited in eight of the 10 deals, including three of the four that ended in bankruptcy.

GS Industries was the 10th-biggest Bain investment in the Romney years.

Bain formed the company in the early 1990s by spending $24 million to acquire and merge steel companies with plants in Missouri, South Carolina and other states. Company managers cut jobs and benefits almost immediately. Meanwhile, Bain and other investors received management fees from GSI and a $65-million dividend in the first years after the acquisition, according to Times interviews with company employees.

In 1999, GSI sought a federal loan guarantee intended to help steel companies compete internationally. The loan deal was approved, but in 2001, before it could be used, the company went bankrupt.

More than 700 workers were fired, losing not only their jobs but health insurance, severance and a chunk of their pension benefits. GSI retirees also lost their health insurance and other benefits. But Bain partners received about $50 million on their initial investment, a 100 percent gain.

Romney himself became wealthy at Bain. He is now worth between $190 million and $250 million, much of it derived from his time running the investment firm, his campaign staffers have confirmed.

Barack Obama is certainly vulnerable because of the lingering effects of the Bush Recession, including unemployment that is just below 9 percent nationally, but if Romney is the eventual nominee the president will eat him alive during debates when jobs creation is on the table.

igf-1 said...
This comment has been removed by a blog administrator.
1:17 AM