Oh Those Wild & Crazy Italians: Kind Of Like The French Without The Fries 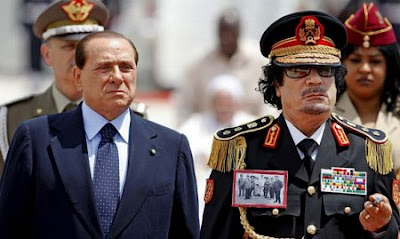 If you need a break from the serial hijinks and buffoonery of the American political scene, look no further than Italy. What's going on there is hilarious if you overlook the fact that Prime Minister Silvio "Bunga Bunga" Berlusconi could well destroy what is left of the economic stability of Europe, which makes our own economic difficulties discreto (not so bad).

A couple of things have focused my attention on Italy -- its incestuous relationship with semi-deposed Libyan strongman Moammar el-Qaddafi and my love affair with Tuscan cooking, which has replaced takeout pizza as a comfort food and is considerably tastier and more nutritious.

Despite Italy's extraordinary cultural history and being home to some of the most forward looking manufacturers in the world, the country has been running on fumes for years.

No one has been willing to make tough choices, austerity programs keep getting put off, a recent New York Times article stated that in a pungent example of jobs for votes, a tiny Sicilian town with virtually no traffic has a fulltime traffic cop and eight part-time assistants while an astonishing 15 percent of all Italians work for the government, and the attitude of voters borders on the somnambulant . How else to explain why the U.S. has had 12 governments since World War II and Italy an astounding sixty-freaking-three. (That is not a typo.)

This begs a Roman Coliseum-sized question: Why do voters keep electing people like Berlusconi? The short answer is that there is nobody better waiting in the wings.

The world community can be grateful, I suppose, that soon to be 75-year-old prime minister would rather play with young senoras rather than, say, a nuclear arsenal or that that oil-laden supertankers bound from the Middle East for the U.S. don't have to transit Italian waters.

At the end of the day, the Italians kind of remind me of the French without the fries. In awe of the past and pissing all over the present. But when it comes to prime ministers, the Italians have the French beat by a parsec.

rental mobil jakarta said...
This comment has been removed by a blog administrator.
9:31 AM