Musings On The Autumnal Equinox 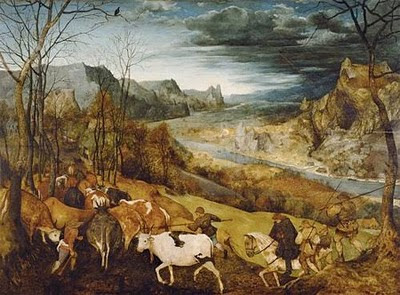 AT THE MOUNTAIN HIDEAWAY -- And so we bid a not so fond adieu to the hottest and wettest summer since record keeping began in the late 19th century. But don't go blaming global warning, oh no!
How hot and wet was it? Too hot or too wet on most weekends that for the first time since forever we did not make a single trek to the Delaware shore, making this the second strangest summer of my acquaintance.

The strangest would be the summer of 1994 when my plans for a long trip to Colorado with my kids were quashed with the discovery of two bodies on the walk outside a condominium on Bundy Drive in the Brentwood neighborhood of Los Angeles. Some 18 months, two entire summers and several hundred newspaper bylines later, I finally was able to shed the ball and chain of the O.J. Simpson murder case. Never mind that it took America a while longer.

* * * * *
It has, however, been a boffo summer for tomato plants because it was hot in June when they were flowering and then hot and wet in July, August and September when they were fruiting.

Two of our plants became so top heavy that I had to drive steel bars into the ground to keep the plants and the wire cages cosseting them from toppling.

* * * * *
When my kids were still kids they didn't particularly share my taste in music with two exceptions -- Third World and REM.

Third World I could sort of understand because of the infectious reggae beat, but I never quite figured out what drew them to REM with its complex melodies, layering and often eclectic lyrics.

Their fondness for REM became apparent on a trip to Colorado the summer after the O.J. saga when they asked me to play the band's great Out of Time album . . . uh, perhaps 25 times. Before long they had memorized all the lyrics, and I have an especially fond memory of looking into the rear view mirror and seeing my eight-year-old son and five-year-old daughter swaying back and forth in the back seat as they sang along with "Shiny Happy People."

So I was kind of sad in a personal way when the band announced the other day that it was breaking up after 30 years.

* * * * *
My big mission this first fall weekend was to repot two large cacti. One is what, for want of a formal name, a Western movie cactus. You know, the kind with lobes that at the uppermost tips look like Mickey Mouse ears.

Anyhow, I wore gloves when I depotted this cactus and repotted it, but still got some tiny needles embedded in my hands and fingers. What to do?

What I did was call a friend who lives out in the desert in Utah. A quick consult with his love elicited the following advice: I was to cover my hands with Elmer's Glue, which I would let dry and then peel off, taking with it the needles.

* * * * *
One of our chocolate Labrador retrievers is now connected to that band of geosynchronous satellites that make GPS units work. That would be Nicky, whom I describe as a nose followed by a 65 pound dog.

You see, there is a 40,000-acre wildlife preserve outside our front door and we let she and Jack off their leashes so they can have a good run. Jack never goes far, but occasionally Nicky catches a scent and she's outta there. She has always come back, but . . .

IMAGE:
"The Return of the Herd" (1565) by Peter Breugel the Elder
Posted by Shaun Mullen at 12:30 AM
Email ThisBlogThis!Share to TwitterShare to FacebookShare to Pinterest

Bite Sarah Palin? Can we get a rabid coyote to do that? Oh, never mind I think one already did.

Hope you are enjoying fall. It's lovely and warm here where I am (currently UK-just back from a whirlwind trip - Costa del Sol, Barcelona, Madrid, Vallencia, Paris, Normandy and now London)

Always great to hear from you and of your travels.