Dr. Ron Paul Has A Heart Of Stone. And Plenty Of Company In Today's GOP. 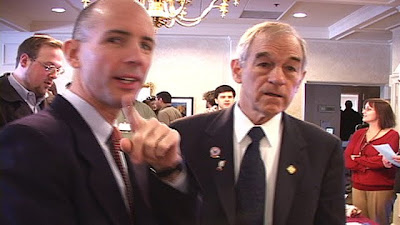 KENT SNYDER AND RON PAUL
There was a special moment during the CNN/Tea Party presidential debate on Monday evening when moderator Wolf Blitzer threw out a red-meat hypothetical: What do the candidates think about the case of a young man who could afford health insurance but chose not to buy it and became gravely ill? Should the state pay his bills?

"That's what freedom is all about; taking your own risks," replied Ron Paul. "This whole idea that you have to take care of everybody--"

Paul's response was drowned out by cheers from the audience, as well as shouts of "Let him die! Let him die!"

The response and applause was a defining moment for today's Republican Party, which has been hijacked by right-wing zealots who are so twisted that they are pro-life when it comes to abortion but pro-death when it comes to health-care reform.

Ron Paul, however, is even more twisted than his ardent acolytes. You see, Ron Paul is a medical doctor and knows first hand what happens when young people don't have health insurance: In 2008, Kent Snyder, his friend and former campaign manager, died of complications from pneumonia at age 49.

Snyder was relatively young and seemingly healthy when the illness struck. When he died on June 26, 2008, two weeks after Dr. Paul withdrew his first bid for the presidency, his hospital costs totaled $400,000. His mother was incapable of paying the bill.

The issue that defines America and its people in coming years will not be reducing the federal budget deficit or what to do about income taxes. It will be health care.

Health care is an inalienable right. Other industrialized countries recognized this years ago. Only the U.S. stands alone in letting tens of millions of its citizens, including many children, go without adequate health care or the insurance to pay for that care.

The rights of insurance and drug companies and for-profit hospital chains trump those of Joe and Jane Sixpack, and Dr. Paul and virtually all of the Republican presidential field are just fine with that.

It was welcome news for 11 million people who were forced into the most stringent restrictions seen on the planet more than two months ago amid the outbreak.Thousands began flocking to train stations ahead of the midnight lifting of travel restrictions.Cars queued at roadblocks soon to be dismantled, and the city's airport readied itself for a busy flight schedule as of Wednesday.Passengers are checked at Wuhan's main train station early on Wednesday morning.

"I saw her car door open, but Coach Outlet Clearance I didn't see her still. Sellers and other justices criticized what they said Air Force 1 In Store was a lack of clarity in the ethics law.The convictions that remain involved consulting contracts with three companies that Cheap Nike Air Force 1 paid Hubbard a total of $525,000 from 2012 to 2014.

"That is why we worried about our friends in America, where the problem of obesity Yeezy Shoes For Sale is well known and where Jordan Shoes For Sale they will probably have the most problems because of obesity."White Supremacist New Air Jordan Shoes Groups Are Recruiting With Help From Coronavirus and a Popular Messaging AppOn March 24, Timothy Wilson, 36, was shot and killed by the FBI as he prepared to attack a hospital in the Kansas City area where patients with the coronavirus were being treated..