Are We Still Capable Of Outrage? 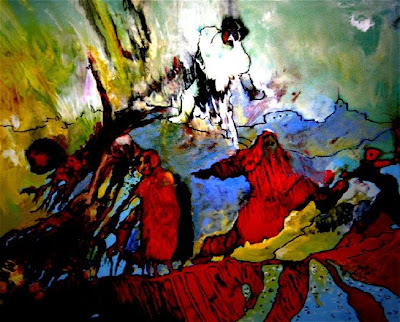 WikiLeaks document dumps over the last year or so on the quagmires in Afghanistan and Iraq, Guantanamo Bay and State Department diplomatic cables, among others, begs an important question: Are we still capable of outrage?
The past decade has been a carnival of disasters beginning with the 9/11 attacks and followed by the fool's mission in Iraq, Hurricane Katrina, the worst economic downturn since the Great Depression with a slo-mo jobless recovery, a deeply fractured body politic roiled by renewed class, culture and race warfare, the BP oil spill, and as the document dumps make glaringly obvious, a government that excels at lurching from crisis to crisis.

Speaking only for myself as an employed, high and dry veteran with good health insurance who has been able to work up a good case of outrage in years past, bombshells just aren't what they used to be. I'm feeling outrage deficient and also suffer from a bit of empathy overload (well gee, why should you be surprised if you chose to live at the beach and your house is swept away in a hurricane?) and that's worrisome because it's just a short ride from those places to outright apathy.

Have mused long and hard on this state of affairs (actually, it crossed my mind in the shower the other day), I believe that the root of my semi-malaise, which seems to be shared by a good many of us, is because we feel disempowered.

Add to that the fact that even the most fervent Barack Obama supporters, including myself, feel . . . well, let down and you've got a perfect storm of disempowerment.

Image by Miki
Posted by Shaun Mullen at 12:10 AM
Email ThisBlogThis!Share to TwitterShare to FacebookShare to Pinterest

I miss the 'good old days' when there were marches on the mall in Washington on a regular basis. (I grew up just outside DC so saw much of it first hand) I ask my kids and their friends why they don't care about what is going on, or at least don't seem to care as they don't bother to vote or get involved. I get answers that include "What can I do as just one person?", or "I'm not going to stand up and say anything because everyone knows that would result in getting your taxes audited and put you on the government 'watch' list. Ugh. I feel like I am trying to lead a charge up the hill only when I look back there's no one there following me.

My angst notwithstanding, never stop charging up that hill.

We do find our collective backbone on occasion. And while that is good, it certainly isn't like the days of the oil embargo when we gave OPEC the collective finger by using wood burning stoves and driving smaller cars. (That conservation movement sure didn't last). Around the web, as around the country, there is only polarization politically as if we, the people, are fans of opposing football teams and no matter what the end score is, we lose. It's the same mental quagmire witnessed in DC that shows our elected officials to suffer from a lack of grace and common sense—hell, how about a sense of the common good? Many seem to have lost the ability to grasp the Big Picture, much happier to bathe in the light of the small screen.
You are correct: There is no outrage when a nation can see no evil, hear no evil, and speak no evil—which makes us, as a nation, blind, deaf and dumb. We speak loudly and carry a little stick that we use to beat up ourselves.