Veep Joe Biden On The Parlous State Of American Politics: This Too Shall Pass 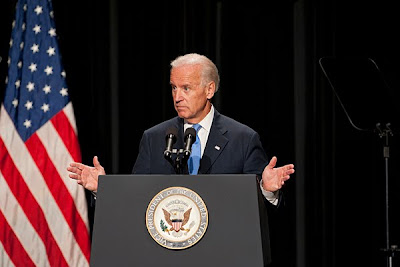 I met the future Vice President Joseph R. Biden when I was 12 and on my way to junior high school and he was 17 and entering his senior year at a Catholic boy's school. I was pretty much clueless and he a gangly kid with no apparent social skills and a stutter. We played beach volleyball together at the Delaware shore for a couple of summers and his folks and my folks became friends. Delaware, you see, is even smaller than it looks on a map.

Biden went on to the University of Delaware, where he excelled at political science in a department later chaired by the late Jim Soles, who was to attract the future managers of both the 2008 Obama and McCain campaigns to Delaware as undergrads. I followed Joe to Delaware where I excelled at nothing except getting in trouble with the dean of men for locking horns with the university administration as the editor of the student newspaper.

Although I sort of kept up with Biden through my parents' friendship with his, our paths didn't cross again until 1972 and my second election as a voter when I pulled the lever for a Joe who had long left behind the traits of awkward adolescence.

He upset a longtime Republican U.S. senator and within days of the election suffered the tragic deaths of his wife and baby daughter in a horrific traffic accident. Persuaded by Senate Majority Leader Mike Mansfield of Montana to not quit, the following month he began the first of six terms in Washington characterized by hard work, foreign relations expertise, a willingness to compromise and a successful hair weave, as well as a tendency to shoot from the lip that he has carried over into one of the more successful vice presidencies in American political history.

In all, this ticket splitter has voted for Biden seven times (no other candidate comes anywhere near as close), the last time in 2008. Next year with be the eighth and I presume last time.

Fast forward to last Friday when Biden returned to his alma mater to donate his Senate papers to the rare book and manuscript library where I work.

The papers will fill 3,000 manuscript boxes, a box being about the size of a case of 12-ounce beer bottles, and include thousands of electronic files and ephemera. It will be a treasure trove for scholars and is especially strong on materials from his tenure as chairman of the Foreign Relations and Judiciary committees.

* * * * *
Biden's day had begun in flood-ravaged Wilkes Barre, Pennsylvania, where he was born. He then visited the family of a New Castle County, Delaware, police officer who was shot dead on Thursday night. After touring our manuscript and rare book library, he gave the first annual James R. Soles Lecture on the Constitution and Leadership to a standing-room crowd.

A recurring theme during his one-hour address was that politics was a contact sport at the outset of the republic and has been intermittently since. While it is hard to see beyond the current political strife in Washington, He noted that there has been gridlock before and things will eventually sort themselves out. Biden, inspired by two extraordinary professors at Delaware that I also had, went on to law school where he specialized in constitutional law, which he taught part time early in his Senate career, and the lecture was timed to coincide with Constitution Day.

"The true accomplishment of our founders was not that they spoke with one voice but that they brought together many voices to forge the Constitution," Biden said. "That is the genius of the document."

As has been proven time and again, the Constitution doesn't provide certainty, he said, adding that the founders knew they couldn't create a document that would settle all questions that might ever arise. "But they could be settled by the institutions to which the Constitution gave rise and power. . . . They built a framework for government that allowed many disparate voices to be heard."

The vice president got in a few jabs at obstructionist Republicans and the Tea Party in particular.

If Americans trust the process of government, he said, today's generation will successfully get through "this temporary period of political paralysis."

With Republicans continuing their hostage taking, most recently with President Obama's jobs bill, it is difficult to see that the paralysis will end anytime soon, and in my view it will only end when the GOP takes such a thumping in future elections that moderates are able to take back the keys to the car.

Photograph by Evan Krape/University of Delaware