I have had an enduring interest in Paleo-Indians, the first peoples who entered and subsequently inhabited the Americas, in no small part because during my relatively brief time on the planet the date of the first likely migration as well as where these first settlers came from keeps being changed because of archeological discoveries.

The first date of entry was fixed at circa 8,000 B.C. when I first dipped a toe into these waters, but every few years a new find has added a couple thousand years or so to that date, 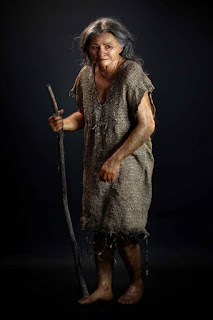 It also is generally agreed that these people migrated during an ice age across the Beringia land bridge, which linked Asia and North America from roughly 45,000 B.C. to 12,000 B.C. and came from eastern Siberia and other regions of North Asia based on distribution of blood types, genetic composition and molecular data such as DNA, as well as the linguistic dialects of their descendants.

But the discovery of one of the oldest sets of human remains found in the Americas has added a new wrinkle to the Paleo-Indian story.

The remains are of a woman who probably lived on Mexico's Caribbean coast 10,000 to 12,000 years ago whom researchers have named "La Mujer de las Palmas," or "The Woman of the Palms," after a sinkhole cave near the Caribbean resort of Tulum where her remains were found by divers and recovered in 2002.

Because rising water levels flooded the cave where the woman died or was laid to rest, her skeleton was about 90 percent intact. Archaeologists and physical 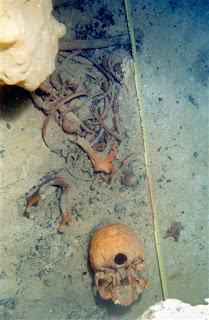 anthropologists calculated she was between 44 and 50 years old when she died, was about 5 feet tall and weighed about 128 pounds.

A model made based on what researchers believe she looks like reveals a short, spry-looking woman with slightly graying hair, but it is where her forebears may have come from that breaks new ground.

"History isn't that simple," Terrazas said. "This indicates that the Americas were populated by several migratory movements, not just one or two waves from northern Asia across the Bering Strait."

Yet evidence based merely on facial characteristics is not conclusive.

Ripan Malhi, assistant professor of anthropology at the University of Illinois, said that "using facial reconstructions to assign ancestry to an individual is not as strong as using ancient DNA to assess the ancestry of the individual, because the environment can influence the traits of the face."