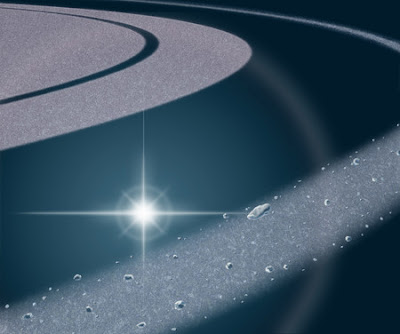 In some respects, Saturn is the madhouse of our solar system. As a succession of interplanetary probes have found, its mysterious moons and rings -- even the true number of which have yet to be ascertained -- are unpredictable in composition and behavior, but the craziest of them all is the F ring.

Unlike its mates, the F ring is not a uniformly smooth band of icy particles, but has kinks in it, as well as two small flanking moons, Prometheus and Pandora.

As Jennifer Ouellette notes in a delightful and informative post titled "Snowball Fight In Saturn's F Ring" at Cocktail Party Physics, the wackiness of the F ring was first revealed in 1979 by the Pioneer 11 probe.

Scientists are interested in studying all of Saturn's rings in greater detail because the processes at work are similar to other systems, including protoplanetary disks, the nurseries where planets are born, our own asteroid belt, the formation of spiral galaxies, and even the accretion disks around black holes.

"It's not the exact same processes at work, but there are striking similarities, so the expectation is that studying Saturn's rings can teach us about the mysterious underlying physics of some of these other celestial objects, as well as the origins of our own solar system," Oullette explains. "How do hordes of orbiting bodies crowd together? How does material accumulate in such systems to form moons or planets? And how do nearby masses disturb -- and are in turn perturbed by -- adjacent disks?"

The latest images from the Cassini probe, which has been lurking in the neighborhood of Saturn since 2004, shed some light on what might be going on inside the F ring that gives rise to its uniquely complex structure.

"The culprit: Prometheus! Apparently the little potato-shaped moon can't leave well enough alone; it's just got to shake things up now and then," Oullette says. "Every time Prometheus passes by the F ring, all the tiny icy particles within it get agitated by the moon's gravitational pull, and start engaging in the particle equivalent of slam-dancing."

These rippling perturbations create "streamer channels," and the particles start to bunch up and clump together into much bigger "snowballs" -- "and I do mean big." Some measure as much as 12 miles in diameter, which means they are large enough to have "self-gravity" -- that is, they can attract more icy particles and continue to grow.

Prometheus swings by this particular segment in Saturn's F ring roughly every 68 days, and most of the smaller snowball clumps get ripped apart with the next pass. But that's not enough time for the streamer channels to subside, and with each pass, more channels are created and complicate an already complex kinky pattern. It's like a giant churn in space.

"Every time [the snowballs] survive an encounter [with Prometheus], they can grow and become more and more stable," says Cassini imaging scientist Carl Murray of Queen Mary, University of London. While it's likely that even the largest snowballs have a lifetime of just a few months, the new data could improve our current understanding of how space debris gets transformed into denser objects.

Cassini scientists believe this could be why the F ring's structure is so surprisingly complex. And it just might help explain another mysterious objects first detected by Cassini scientists back in 2004: it's called S/2004 S 6 -- being too new to warrant a more formal moniker -- measures between 3 to 6 miles in diameter, and every now and then it bumps into the F ring and produces a spray of debris.

"Maybe it's one of those giant surviving snowballs," Oullette speculates. "Maybe it's something else entirely. We'll have to wait to see what else Cassini tells us."