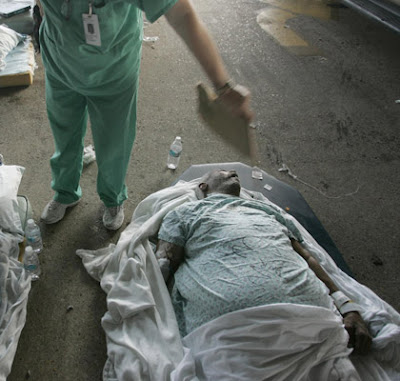 A Memorial Medical nurse fans a patient with "DNR"
(Do Not Resuscitate) written on his gown
(ORIGINALLY PUBLISHED IN SEPTEMBER 2009)
If you know a medical professional or an aspiring one, please urge them to read the August 30 cover story in The New York Times Magazine. This report by Sheri Fink is not just timely because of the health-care reform mess, but timeless because of 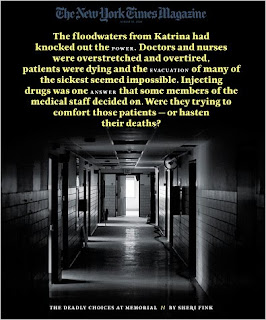 the profound life and death issues that were raised when Memorial Medical Center in Uptown New Orleans became marooned by Hurricane Katrina four years ago this week. Some of these issues also are being confronted, albeit under less disastrous conditions, at struggling hospitals around the country overwhelmed by indigent and uninsured patients, while the story is a model for how quality investigative journalism can survive at a time when it is disappearing.

By the time the flood waters receded, 45 patients had been lost at Memorial, the deaths of at least 17 hastened by Dr. Anna Pou (below, left) and two intensive-care unit nurses, all well respected, who had injected them with lethal doses of drugs. Bodies were put on the floor of the hospital's second-floor chapel (below, right) because there was nowhere else to take them.

The report by Fink, herself a medical doctor, is first-rate investigative journalism: Balanced, educational, provocative . . . and heartbreaking. Yet a key piece of this tragedy is merely alluded to: What happens to locally owned hospitals attuned to the needs of their communities when they are taken over by big national chains, in this case Tenet Healthcare, for whom profits always are more important than patients.

From the lowliest housekeeper to Tenet executives ensconced in air-conditioned comfort at the company's headquarters in Dallas, myriad actions had to be taken and decisions made in the wake of the devastation.

Having now thrice read Fink's story, my big takeaway is that given the conditions, the actions taken by Memorial's staff were appropriate for the most part. They showed an extraordinary concern for and devotion to patients trapped in 100-degree plus temperatures without electricity and running 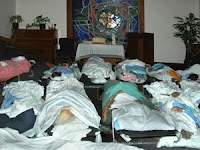 water. The decisions central to the story were how to deal with terminally ill patients, some with Do Not Resuscitate orders, after any reasonable hope of rescue had faded several days on.

With elevators out, even something as relatively simple as evacuating patients to a helipad (below, left) atop an eight-floor parking deck involved having to pass them through a small opening in a machine-room wall and up narrow stairs; in one of a myriad number of small but difficult decisions, it was decided to evacuate Rodney Scott (below, right) last. This was because at an obese 300 pounds, he might get stuck in the opening and back up the evacuation line.

Although Tenet did dispatch some helicopters, it was otherwise shockingly imperious the needs of its staff and it appears that no effort was made to airlift or float in necessities and additional staff. As it was, many patients were rescued by an armada of airboats 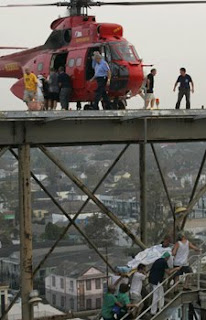 (below, left) organized by volunteers.

Memorial was originally called Southern Baptist and had an excellent reputation as a community hospital that served a clientele ranging from the genteel to residents of a nearby housing project. After Tenet purchased the hospital in 1995, it was renamed Memorial Medical and as has been typical with the corporation's purchases -- Hahnemann University Hospital in Philadelphia being a case with which I am especially familiar -- it was bled of resources in repeated waves of cost cutting in the service of profit taking.

Tenet is a defendant in a wrongful-death lawsuit stemming from what happened to one patient at Memorial, but the consequences felt by Dr. Pou and other members of its staff who took actions and made decisions absent guidance, support and resources from Tenet have been far greater.

This is not to say that Tenet has always skated. In 2006, it agreed to pay $725 million in cash and give up $175 million in fees for overbilling Medicare claims over a

six-year period. Its hospitals also have been accused of subjecting hundreds of patients to unnecessary heart surgeries, and that's just the stuff that we know about.

What happened at Memorial and is happening at hospitals owned by Tenet and other big corporations should be a cautionary tale as the health-care reform debate plays out. But it won't be. This is because these companies have enormous influence in Washington and are expert at three things: Making money, twisting arms and shirking responsibility for their central roles in the outrageously high cost of health care.

Fink reveals that there are nine different triage protocols used at American hospitals, which helped compound the Memorial madness.

And if there ever was a reason for tidying up all emergency procedures, this is it.

* * * * *
As noted by Yours Truly here and here, investigative journalism isn't cheap, which is one reason that so few newspapers do it anymore. Another reason: With most big papers run by greedy corporations (yeah, kind of like print Tenets), few papers are willing to take chances.

and fact checking. The rest is broken down here.)

The story's high cost aside, it is a model of where investigative journalism could and should be headed in that a goodly part of the cost was underwritten by Pro Publica, a public-interest journalism organization that bankrolled author Fink (below, left), as well as a few bucks by the Kaiser Foundation after she had shelled out her own dough to get the story rolling.

Pretty selfless, eh? Yes and no. Fink knew she had a great story that needed to be told, which she did admirably, but certainly understood that there was a good chance that she could sell it. 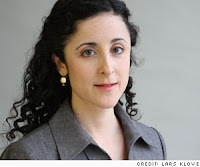 over the last seven years. Every cent of this project has come out of pocket.

Do I think that a dead-tree publisher will pick up my book? Who knows? But allowing this important story to see the light of day and in the process provide a modicum of justice for the victim's family and friends is what matters most.

POSTSCRIPT: Fink was to go on to share the 2009 Pulitzer Prize
for Investigative Reporting with two reporters from the
Philadelphia Daily News, becoming the first journalist
to win the coveted award for an online article.

God bless Charity Hospital. I was treated there many years ago by a disheveled, Marlboro-smoking surgeon and a troup of his med students from Tulane who seemed to revere the guy when, after, they said the surgery was "beautiful."

Post-op, I was attended by nun in a full white habit and a nursing assistant, a big woman, who called me "angel." They treated me like a prince, not the unemployed and broke geology graduate I was.

Later, Charity Hospital sent me a bill. I sent them partial payment and never heard from them again.