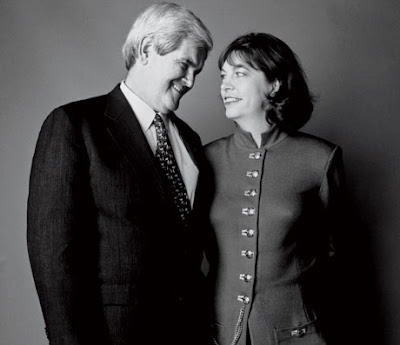 The Democratic Party has been the active instrument of breaking down traditional marriage.
~ NEWT GINGRICH

A politician's personal failings should not necessarily disqualify them from office, at least up to a certain point. But Newt Gingrich -- who as a front runner for the 2010 Republican nomination for president harps incessantly about what he views as the moral shortcomings of others who do not share his constipated conservative views -- may take the cake for his sheer hypocrisy.
It has been no secret, nor has the smarmy latter day Catholic tried to keep it secret, that for him women are goods that are to be used and then discarded.

He started dating his first wife -- his high school geometry teacher -- when he was a post-pubescent 16 and then dumped her while she was recovering from uterine cancer. He remarried but dumped that wife when she discovered she had multiple sclerosis, to remarry yet again, this time to a congressional aide who was 23 years his junior with whom he was having an affair while spearheading the Clinton impeachment circus,

Even with that knowledge, a tell-all interview with second wife Marianne Ginther Gingrich in the September issue of Esquire magazine is nevertheless shocking.

Marianne was having problems of her own. After going to the doctor for a mysterious tingling in her hand, she was diagnosed with multiple sclerosis.

Early in May, she went out to Ohio for her mother's birthday. A day and a half went by and Newt didn't return her calls, which was strange. They always talked every day, often ten times a day, so she was frantic by the time he called to say he needed to talk to her.

He wanted to talk in person, he said.

"There's somebody else, isn't there?"

She kind of guessed it, of course. Women usually do. But did she know the woman was in her apartment, eating off her plates, sleeping in her bed?

Gingrich had just returned from Pennsylvania, where he'd given his usual stump speech about compassion and family values.

[Marianne] called a minister they both trusted. He came over to the house the next day and worked with them the whole weekend, but Gingrich just kept saying she was a Jaguar and all he wanted was a Chevrolet. " 'I can't handle a Jaguar right now.' He said that many times. 'All I want is a Chevrolet.' "

He asked her to just tolerate the affair, an offer she refused.

. . . The next night, they sat talking out on their back patio in Georgia. She said, "How do you give that speech and do what you’re doing?"

That modus operandi certainly was in play when Gingrich was Speaker of the House in the 1990s and infamously shut down the federal government. He also has the distinction of being the first speaker to be reprimanded in the House's history for ethics violations.

Gingrich said last month that he never was more serious about running for president, and considering the competition -- Palin, Pawlenty and Romney -- he may have a shot at the nomination. Sadly, his moral rot will not be an issue insofar as being nominated, although it's a safe bet that few woman voters who don't dutifully walk a few steps behind their husbands will vote for him.

Oh, and his third wife better hope that she doesn't get sick.

Photograph by Jesse Frohman/Corbis Outline
Hat tip to Sarabeth at 1115.org
Posted by Shaun Mullen at 12:10 AM
Email ThisBlogThis!Share to TwitterShare to FacebookShare to Pinterest

Shaun, sorry for the delayed response on this one, as I was away visiting my Mom. But this is terrific on Gingrich. I had not payed attention about his wife having MS. My daughter does and so this piece brought his lack of compassion, as a husband and leader, home to me. Thanks. I look forward to reading Esquire on this topic.
Best,
Charles